"Mamma, I've noticed something," said Ethan as he was climbing into bed. "All of the people that assassinated other people have three names. It's like they're in a club or something."

I hadn't thought of that before, but the thought was rather strange...John Wilkes Booth, Lee Harvey Oswald, James Earl Ray. What was up with that?

But why were we talking about this at bedtime? Ethan's had tragedy on the mind lately. One reason is school. They're working on biographies and each kid has to choose a person to research and then give a talk to the class. Actually, I think they have to pretend to be that person. Ethan choose Martin Luther King Jr. He's always loved him and his story. In fact, whenever Ethan talks about him, it's in an affectionate, intimate way, as if he knew him. He calls him just Martin, and it's not meant disrespectfully at all. "Do you know what Martin was most best know for?" he'll ask, or "Do you know when he died?"

And that's just it. He enjoys reading about historical figures like Martin Luther King or Abraham Lincoln, but he keeps gravitating towards the fact that they were killed. Right now for homework he's reading The Day Lincoln was Shot. Then there are the Titanic books. I don't know what it is, but it seems most kids in elementary school hit this Titanic stage. For Anna and her friends it was either second or third grade. They used to play Titanic at recess, and pretend they were either going down with the ship or jumping into lifeboats.

What seems to most fascinate Ethan about all of these incidents is the number of events that had to work together to lead to disaster. "Why??" he'll ask me in anguish. "Why did Abraham Lincoln's bodyguard take the night off when he went to the theater? Why didn't he listen to the dream he had two weeks before about the president dying?"

I tell Ethan to try to focus on the amazing things these people did when they were alive rather than just their deaths, but lately it's falling on deaf ears. And I feel a little sheepish having these pep talks with him, because I used to be exactly.the.same.way.

I too went through a Titanic phase, and a truly autistic-like obsession with the JFK assassination. How many other ninth graders had their bedrooms piled with JFK books on assassination theories How many others were sitting in class on the 25th anniversary of his assassination looking at the clock and noting the exact moment he was shot? This is one of many reasons I swear I have some spectrummy genes in me, too.

Then there was Guideposts. For the uninitiated, Guideposts is this little inspirational magazine (I think it's still around, but who knows?). My grandmother used to get it and stored scores and scores of back issues in her closet off the dining room. The magazine in theory features stories about ordinary people or celebrities making it through some kind of trial, trauma or tragedy, and how their faith brought them through and brought them closer to God. Only, I tended to read these stories and focus only on the horrific tragedy. For years upon years, I would sit in Nonna's closet and read issue after issue of Guideposts. Just seeing something like this (a cover story I clearly remember, about a man who survived the Mount St. Helens eruption): 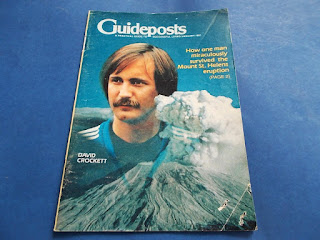 brings back the very real smell of mothballs from that closet and the muffled click as the pull-string light turned on. There were stories about people who lost their homes in tornadoes or wildfires or loved ones in plane crashes; the woman who watched most of her children die of a rare disease; the kid who fell out of the window and into a coma, and so on. Every one of these stories had some kind of uplifting ending that I for the most part cannot remember.

I have tried for years and years to figure out this obsession with tragedy, and I'm not much closer now. But to see Ethan start to turn down this path...I'm not 100 percent sure what to do. I know what NOT to do. We try to keep him away from upsetting news stories on TV. Or documentaries. Just like me, he'll be the first to want to watch something like, "The Day JFK Died." I'm trying not to indulge all of his tragedy talk. Meaning, we'll talk about it for a little bit, because it is interesting. But I'll try not to add too much fuel to the fire. And I'll attempt to throw out something interesting I've learned about the person he's learning about. With Martin Luther King, for example, I shared how not long ago I learned he had spent a summer up here when he was young, working in tobacco fields, and seeing the interactions here between blacks and whites helped in part shape him into the civil rights leader he would become.

But what I can't stop him from is that initial gravitation towards the melancholy. I don't know how one becomes un-melancholy. I can tell you there are very many times I wish I wasn't. I WISH I was someone who laughed all the time and didn't know the exact details of every plane that crashed on 9/11. I wish I had a way to wrap all of this up neatly here with a bow. But just as we can't rewrite history, we can't completely rewire some of our darker ways of thinking. We just don't need to indulge them. 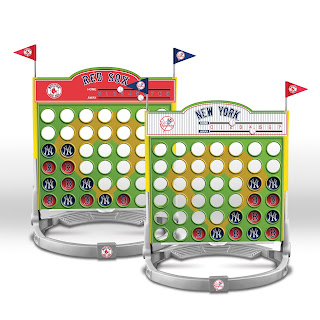 The other day Ethan asked if we could play a board game. I inwardly cringed when he selected Connect Four. I'm not a big fan. To me the game is glorified Tic Tac Toe. We have this special Red Sox vs. Yankees version and just looking at the NY logo on the little navy blue circles makes me cranky. Plus Ethan's as smart as a whip and often beats me.

Which leads me to my point. We sat down to play, and in my usual way of not really paying attention to detail, Ethan beat me twice before I realized the little bugger was setting up this certain pattern every single time and I was falling into his trap. The third time I started to put in a circle (thankfully, he lets me have the Red Sox-themed red circles) he didn't like where I was dropping it and tried to put up his hand to block me.

"What do you think you're doing?" I challenged him.

"Well...Ben is nicer than you! He lets me do that at school." Ben is one of his good buddies. They play sometimes during indoor recess.

"You're right, Ben is nicer than me," I said with a smile and made my move.

"Noooo! You can't do that. I had a strategy and you're ruining it!" he complained.

As the game went on I observed how truly agitated he was that I had found him out and that he was going to have to devise another plan to win. As often happens, I realized how there are so many teachable moments sitting in front of us -- opportunities to take those lessons learned in social skills group and with the social thinking curriculum and apply them to everyday activities.

"Ethan, you're going to have to be more flexible. The old way's not going to work. You're going to have to come up with a new way to win." He hemmed and hawed, growled and groaned, but after a few minutes settled down and started thinking. Sure enough, once he focused and stopped being so hung up on his plans being changed, he was able to come up with a new strategy. He won the next game.

I just have to say it's kind of sad when you just KNOW your nine-year-old is smarter than you. I'm not just saying that. I always feel like I'm a relatively smart person until I'm around Ethan and Dan.

But smarts aren't everything. They're not nearly as much as you think. We've all heard about emotional intelligence in recent years. Never mind the fact that it's more important that my children be loving, kind and generous rather than simply smart. That aside, even if you have smarts you can fail spectacularly if you lack confidence, empathy, flexibility, and perseverance, to name just a few.

To bring it back down to Connect Four: winning means next to nothing if Ethan always wins the exact same way...if someone lets him win...if he has no idea how to adapt when someone figures out how to beat him...and if he doesn't know how to cope if he doesn't win.

Next time we play, maybe we'll do Battleship. The last time we played his idea was to put all the ships in the center right next to each other. This plan worked great until I figured it out and wiped out all of his ships one after the other.

Then he got mad and threw his ships across the room.

Yup. Another game, another lesson for another day.