The other morning Ethan issued a big sigh -- one of many he's emitted lately.

"Why did we get this tree?" he demanded. "It's the worst Christmas tree ever."

And truly, it is. We cut down our tree on December 1, immediately got it into a stand, and began faithfully watering it. No matter. The entire bottom of the tree is completely bare. The cat walks underneath and needles rain everywhere. The needles are so thick on the carpet I'm afraid to use the vacuum for fear of breaking it.

"All of the needles are going to be gone before Christmas!" Ethan wailed.

"Ethan, stop. No they're not." I heard more needles rain down. Hopefully.

He followed me into the kitchen and I began to prepare Chloe, who happened to be jumping and dancing around the room singing "Jingle Bells," a bowl of cereal.

"Why can't we just buy a new tree?" Ethan begged.

"Ethan we are NOT spending money on a completely different tree at this point..." I was interrupted by Chloe slamming accidentally into my arm, mid-song. The bowl went flying into the air before landing on the floor, splashing milk and Life cereal everywhere. Chloe ran into the other room, shocked at what she did. I found her sitting huddled in a rocking chair next to the tree. Needles were still raining.

"It's okay hon, it was an accident," I tried to soothe her.

Ethan had followed us in. "No one is allowed to go near this tree until Christmas," he announced, glaring pointedly at Chloe.

"I can't stop the cat," I told him, heading back to the kitchen to wipe up the cereal mess.

"That's it! You need to give these people a bad review online," he decided. I'd thought about it. But that seemed so...Grinchly.

After breakfast, I looked up the tree place on the computer as Ethan peered over my shoulder. "Five star reviews!" Both of us were incredulous. "Why are all these people giving them freakin' five stars?" Ethan screeched.

"Stop with the freakin'"...I said automatically. Five stars. Sheesh. Maybe it was their family members rating it or their closest friends. There were only six reviews after all.

"Ethan, I can't." I kept picturing the happy couple at the tree place, walking up to our car, ready to hand us a saw. They were a very small tree farm. I didn't want to put anyone out of business.

The pestering continued until I told Ethan I wouldn't review the place online but would give them a little call to express my displeasure with the tree. As the sun came up and threw light into the room, it looked even worse. Never mind the spider webs on the star.

Later in the afternoon, I had a chance to dial the number. You Scrooge. Who calls to complain about a Christmas tree? What did I want them to do, anyway? Refund me? Just as I was about to hang up, I heard more needles pouring down. Soldier on, I told myself, gritting my teeth.

Only -- no one picked up the phone. The voice mail cheerily announced that the tree farm was now closed for the season, and "Merry Christmas!" My guilt momentarily disappeared. THAT figured. Maybe I SHOULD go online...only the reviews were so nice. IF they were real reviews. They talked about how kind and helpful the owners were. I couldn't do it. We were just going to have to suck it up.

I wondered about tinsel. Maybe I could buy some tinsel and wrap it around the bottom. That might make it less noticeable. Only -- putting tinsel on would mean touching the tree. And even more needles would pour down.

"Mom, I kind of was hoping I'd come home from school today and find a new tree in the living room," Ethan confided that evening.

"Eeth. It's a week until Christmas. Do you think I have time to completely take apart this tree and set up another?" I exclaimed.

"But this tree is sooo bad..." he whined. And there we had it. The day had come full-circle.

The next morning began with more of the same. "This tree looks like a dead man's fingers," Ethan said glumly. He had trouble motivating himself to get dressed, he was so upset.

"Look, you're going to be late for school. You HAVE to get dressed," I said through clenched teeth.

He lay on his bed, staring sadly at the ceiling. I was starting to lose patience.

"You're not helping me!" Ethan exclaimed.

"I'm trying to give you some perspective," I muttered.

That evening we sat in the dark for awhile looking at the glow of the tree.

"Mom, can we put that yellow caution tape around the tree until Christmas morning?" Ethan asked, as more fell off, inexplicably. This time I saw him cracking a smile. And a little laugh. Progress.

It was time for Ethan to go to bed. "I'm just worried because I don't know what the tree is going to look like on Christmas morning," Ethan confessed. "I'm so worried about it."

"Can we pray the needles stop falling off the tree?"

"We could, but that's nature, Ethan. How about we pray instead for peace? So that no matter what happens, we can be a peace with this, and you can sleep instead of worrying about the tree, and we can still enjoy Christmas. That's what the peace that passes understanding that they talk about in the Bible is all about."

And so we did.

Today, needles are still falling. We're soldiering on towards Christmas. And Ethan was able to leave for school with a smile on his face. 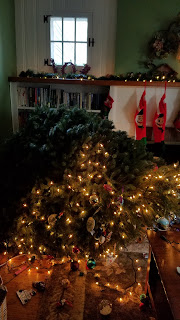 This year we decided to be traditionalists and cut down our own Christmas tree. It had been a few years. Dan Googled this place in town and as we turned the corner I got a sinking feeling in my stomach.

"I think we've been here before..." Vague memories of a scruffy, diseased tree that lost its needles way too quickly came slowly back to me. There was no turning back now. The tree farm owner had spotted us and waved, grinning happily at seeing another customer.

"Where are the big trees?" the kids were asking from the back, craning their necks.

You know it's a bad sign when they're actually advertising, with a hand-written sign, "Charlie Brown Trees."

They weren't ALL Charlie Brown trees. Just most of them. But after walking for awhile we found a big fat one. Cutting it was difficult because the needles were so sharp.

"Aren't these the needles that really cut us all up?" I asked, but the saw was already through the trunk. We were committed.

Getting the tree onto the roof of the van took a considerable amount of huffing and puffing. So did getting it off the van at home and into a tree stand. Then there it was hogging a corner of the living room until we could decorate it the next day. "Let's call her Plumpy," someone suggested.

The next afternoon we put on Christmas carols and took out our decorations.

"Mom!" Ethan called out, just as we were about to start. "There's a spider on the star." He looked more closely. "There are LOTS of spiders on the star."

Cue screeching. Someone got a broom. Chloe ran to get her little broom and started waving it around wildly. I got the vacuum, ready to attack. "It's not working!" I cried out. Those creepy critters kept crawling away and getting to the back of the star where I couldn't reach with the attachment.

Dan took down the star and he and Anna started counting the little spiders on the star ("two, three...eight, nine...twelve"). We were horrified.

"That star is NOT going back up on the tree," Anna insisted when it was washed out.

"It HAS to!" Ethan yelled. "That is our special star." After a few minutes of arguing, he started crying. I mean wailing. "We HAVE to put up that star! It's been up forever!"

"Ethan, we got it last year. It's hardly a family heirloom," I said. It took him a half-hour to calm down, and he and Dan went off to Job Lot to get a new star.

A few days later, as Ethan was glancing over at our nice, plump, scratchy tree, Ethan said: "Mom? There's another spider on the star."

Now I knew it. The tree was infested, not the star (I'd thought maybe spiders had gotten into it while it was stored in the basement). The horror.

Ethan looked at me expectantly. "Well, there's nothing we can do about it now," I sighed.

Two days later I was out doing a freelance job and Anna was watching Ethan and Chloe. I arrived to Ethan running out the door, barefoot and stressed.

"The tree fell over!" he shouted. "I was just trying to fix the star from being crooked and the tree fell and water went everywhere and there's ornaments all over the floor!"

Inside a sorry sight awaited me.

"Thank God you're home," Anna said. "He was running around crying and went outside and hid in the tree."

"I'll help, mommy!" Chloe kept saying, trying to pick the mammoth tree up while dancing around glass ornaments on the floor in her bare feet.

Ethan, Anna and I tried to push Plumpy back up, to no avail. We lay on the floor and attempted to fiddle with the screws on the tree stand. Exasperation and sweat followed, and the tree remained slumped on the floor. The lights started falling off, too.

"This tree is cursed," I decided, vowing we were going back to that simple place next year right on Route 5 where the trees had no spiders, stayed in place, and had needles that didn't cause allergic reactions on my hands. I had tiny cuts everywhere.

Eventually Dan righted the tree, but it still didn't look right. It leans...but no one dares fiddle with it. The ornaments are clumped in various places because Chloe keeps taking them off and putting them somewhere else. (She's also lost half of our stockings, at the moment.)

Our tree debacle reminds me of past ones, and there have been many: the gravy 911 a few Thanksgivings ago; the time our toilet broke while I was fighting to bake a pie crust; many cookie experiments gone awry; the bag of goodies that we gathered for homeless people that ended up being something we'd snack from in the car since we never gave it away. To this day, Chloe calls the brand of gum that was in it "homeless gum."

Those are the lighter ones. But we all know the dramas that have played out over so many holidays and family occasions that shatter us all the more because they happen at those times that are supposed to be "joyous." Missing faces and disagreements and addictions and illness and loneliness and broken promises and things not being anything like we thought they'd be.

Everything's always going to be broken, I heard in my head. This world. Our hearts. Our plans and dreams sometimes.

And that's the point. That's the ultimate Christmas story.

The manger and the savior. The ultimate gift. Peace, goodwill and reconciliation with God. The promise, the truth that we can't do this on our own -- and that whatever we can't fix, whatever we don't see realized, will one day fade in the light of God's glory.

- Faith Hill, "There Will Come a Day"