Try to See it My Way

"Can't you have a little bit of empathy!" Ethan cried out, exasperated. He'd asked for gum and I'd said no, not at the moment.

At school they'd been talking about seeing things from other people's point of view. This wasn't a social skills thing. This was an everybody lesson, because really, all kids need help in this area (who are we kidding? -- adults, too). "You're supposed to understand how much I want that piece of gum," he said accusingly, and sadly.

"I do," I told him. "But you're supposed to understand that it's time for you to leave for school, not to be digging around for gum!"

This empathy thing, this trying to place one's self in the mind of another, has been big in our house lately. No more so than the way it relates to Ethan's new favorite video game. Namely, he's obsessed. And we're trying to kindly communicate that not everyone adores the game as much as he does.

It's hard to put his favorite game, Baldi's Basics in Education and Learning, into words. I say that because it's a spoof game. Baldi's Basics does not have stunning graphics or a complex story line. It's actually design to be a scary/funny take off those old "edu-tainment" games that became big in the 90s and often came on CD-ROM. You know, the whole "let's make learning fun" concept with a kindly voice talking you through the game and helping you to solve puzzles or answer questions. I just don't know what to say about a game whose main character (Baldi) looks like this: 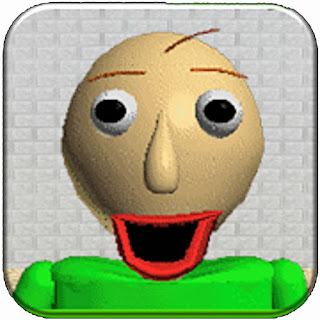 Baldi's Basics takes place inside a school. The object of the game is to solve math problems and collect seven notebooks placed throughout the school. Only -- some of the math problems are purposely unsolvable, and when you get a problem wrong, Professor Baldi begins  begins chasing you around the school. There's a host of other characters including a principal and janitor, and the entire game is badly drawn, poorly executed and downright ridiculous -- especially when Baldi catches you with a "jump scare" and buzz-saw sound. This is, of course, what makes it absolutely entertaining to 10-year-old boys.

Or at least to Ethan. He spends most of his screen time coding his own version of Baldi games. He has been known to bring a ruler to school and slap it against his hand, Baldi-style, and chase people as if he's Baldi. We caught him up at 4 a.m. one morning; he'd been sneaking Baldi videos on YouTube for hours.

"Ethan," I confided one day when he asked me to view one of his Baldi coding projects again, "I hate to say it, but I'm getting a little tired of Baldi."

"What?" he exclaimed. "But Baldi is my heart!" My confession really bummed him out, so much so that an hour later he was still talking about how sad he was that I didn't like Baldi as much as he does.

"I don't think ANYONE likes Baldi as much as you do," I told him.

"But why? He's so great. It's so funny..." he began a detailed description of all the items you can gather in the game, Baldi's different faces, game glitches, and so on.

"Eeth, remember all that stuff you've been talking about at school about seeing things from other people's point of view?" I asked. "You have to apply that to Baldi, too. People just may not like it as much as you do, no matter how hard you try."

I wracked my brain and then it came to me. "Come here," I urged him from the computer, where I was going to YouTube. I typed in the two words that had brought me so much joy, circa 1988. Growing Pains.

"You see this?" I asked. "THIS was my absolute favorite show when I was just a little older than you. I LOVED this show. I had posters. Scrapbooks. I memorized the intros. I gave every episode a GRADE. I learned the theme song on the keyboard."

Ethan's eyes were already glazing over at the theme song and then a scene in the Seaver family living room.

"But Ethan?" I continued. "I couldn't get ANYONE to like this show as much as me. No one in my family liked it. I didn't even try. They thought it was so cheesy."

"What is THIS?" he started moaning as the canned laugh track kicked in.

"You see? See, this is just what I mean," I said excitedly. "You are so bored watching this. That's just it. That's how other people feel about Baldi sometimes. I can't MAKE you be obsessed about Growing Pains. You couldn't care less. And that's okay. It's just what they were talking about at school. Can you see from my point of view?"

Ethan looked at the computer screen, unconvinced. "But Baldi is the best. I want other people to like it." He drifted away from Growing Pains. I could see we were back to square one. I wondered if this obsession would fade before most of the other kids at school tired of it. I wondered if it would ever fade for Ethan.

Then I watched Growing Pains for a minute, because when I did I remembered sitting on the floor two inches from the TV and not letting anyone speak so I could catch every bit of dialogue, and calling my friend during the commercials, and my Kirk Cameron: Dream Guy unauthorized biography, and the TV Guide article about the show I carried crumpled in my pocket in seventh grade. 'Cause yeah. Like Baldi, it was corny and predictable and no one in my family liked it like me. And yeah, Growing Pains still kind of is my heart.