Letting Go of the Wheel

The other day I moved a cabinet to dust for the first time in way too long and saw something covered in dust. After brushing it off, I realized it was this: 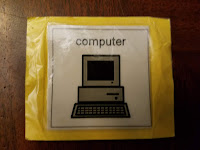 Most people who have a child in speech therapy or with special needs will recognize immediately what this is -- a PECS (Picture Exchange Communication System) card. Children who are not yet verbal can use them to communicate. They're also helpful for creating visual schedules. This is why Ethan's speech therapist made them for him. His speech was catching up, but PECS was great for reinforcing ("first you take a bath, then you can have a snack") and showing him what was going to happen in any given day. We had a binder with a piece of Velcro attached and you could stick various cards (i.e., Library, Lunch, Computer) across in a row to show the order of things. I find it hysterical that the last of the cards to survive is "Computer" for Ethan, Lover of Screens.

This could be a post about how far Ethan has come since the days of those pictures, and that wouldn't be a bad thing. That is, really, what first came to mind when I saw the card. Those days of therapists in the home or going by a visual schedule seem like a long time ago. I am really grateful Ethan can speak and make his requests known, as well as his feelings.

But after a few seconds a whole other host of emotions came to mind. I thought of the parents out who might find something like this years and years later and have to face the reality that things hadn't changed all that much. Maybe their child is 12 and still has to use them to communicate. Maybe they are still showing these cute little pictures to their 20-year-old to indicate what's coming up next.

Then I thought about how many of us parents (and I would include Dan and I in this category) are so thankful for the amazing strides our kids have made...but with every accomplishment, new challenges present themselves. Often with autism, one obsession is overcome only to be replaced by another. One obstacle is conquered but a new one crops up. It's kind of like that whack-a-mole game. In Ethan's case -- there's no denying he's doing incredibly well. We're so proud of him. But he is getting older, and that means there's more intense emotions, more intense obsessions, and greater demands socially. He holds things together really well at school. He just saves a lot for us, I guess because it's safest with us. The way it should be. In that respect, the picture of the computer seems kind of quaint. We've had more violent outbursts about our computer these days than I would care to count.

But even beyond that -- as I looked at the picture I realized how in some respects this is something all parents deal with. The challenges that seem really insurmountable when your child is three (potty training; tantrums) don't tower so large when they get older. In part that's because they're replaced by new ones. The demands when they're little can take so much out of you physically. As they get older, I think it's our minds and emotions that are often challenged: "Did I say the right thing? Should I have let her do that? Will he remember what we've taught him about that? Will he stay on the right path?"

I'll be honest here: there are days I wouldn't mind dealing with some issues that are a little more cut and dry. And there are times it seems parenting can become heartbreakingly more difficult.

I hate to write this to sound like a downer or to scare parents of younger kids. I think one thing I've learned is nothing is wasted -- the "littler" things you go through with your kids when they are young may seem huge at the time and not so much in retrospect, but no matter what they are, it's training for what's ahead. It's training in how to make wise decisions; work together as parents; help your child as an individual.

And as the years go by you learn to balance that pressure of I-am-the-parent-and-am-utterly- responsible-for-the-outcome-of-this-little-being to letting them go to become their own person.

Sometimes this will involve a lot of pain, prayers and tears.

Sometimes it will take everything in you not to blame yourself for your mistakes.

Sometimes you'll shine with joy at the steps they're taking as they begin to walk on their own.

Sometimes your heart will be ripped out of your chest.

We will always have a part to play. Parents of those with special needs often have an even bigger role. But in the end, in some way, shape or form, we have to let them go while simultaneously hoping, praying, and loving. Let go of the futures we had planned for them, the dreams and expectations, and know that life can take all sorts of interesting twists and turns. We can believe eventually they will ride the rough waters to land on the right path -- but when they do, it won't be from everything we "made" happen.

In the end, it can never be just up to us. That's too big of a burden to bear.

When I see that little picture from a long time ago, I'm thankful for God's grace...for the progress we've seen in all of our kids, and the patience and fortitude to wait for the change we still hope to see.

There's a beautiful song by Jason Upton I used to love that he wrote to his firstborn son, Samuel when he was born. Part of the lyrics  go:

Never give up, never stop trying

And it struck me that while those he is singing to his child, those are words God sings over us, too, on this wild adventure that is parenting. And so we walk on, with faith, with joy, with expectation, but not so much with the control we like to think we have.