"Mama, go rake me a big pile of leaves so I can jump in!" Chloe demands as we head outside.

The leaves have wrestled themselves free from the trees in our yard again and are scattered, well, everywhere imaginable. We've had a love/hate relationship with the trees and the leaves in our yard. Lately it's been a little more love. Yes, if we were to rake them all we'd have easily 150 to nearly 200 bags. They're endless. They're annoying. They are an inviter of drudgery all around our neighborhood. You can almost hear the collective sigh on Saturday mornings as everyone gets to work with their leaf blowers and mowers.

But something about leaves whispers childhood...my own, and my kids'. I love the sweet, hay-like smell of dying, brittle leaves. I love the sound they make shuffling underfoot. And yes, it's a rite of passage, growing up in New England: raking a big pile of leaves simply in order to jump in them.

I remember the feeling of covering myself with leaves -- the scratchiness and dirt in my mouth and crumpled bits of leaves in my hair. Like being buried in sand at the beach, it's itchy and claustrophobic. But it's part of being a kid.

When Anna was just four months old I took a picture of her sitting in her baby carrier under one of the maples in our front yard, while I raked leaves. By the next year she was walking and the year after that she could run and jump into them -- which made the job infinitely more difficult. But also more fun.

That's always the tension, isn't it? You have things you need to do, and kids make things more messy and harder to accomplish, but also make you slow down and maybe even laugh, or actually jump into them yourself...if I we can take our eyes off the task at hand for just a moment.

The neighbors across the street, whose kids are grown, plunge into their leaf chores each October and November with grim efficiency. They mow and gather and clear the mass of leaves with precision and in what I would consider record time. No one is yelling...but no one's laughing, either.

Another neighbor doesn't tend to the leaves herself at all but rather calls a group of guys to stop by and remove nearly every last one of them in the span of a couple of hours.

I've written before about our arguments over leaf raking: the tears, the throwing down of rakes, the bribery, the backaches, the endless quest to complete a task that never gets done. For years, they stressed me out.

Then I started to realize a few things. I realized we didn't HAVE to rake all the leaves. I want to, but sometimes life, especially this stage of life, gets in the way. And while I do want to get rid of at least some of them, particularly in deference to our neighbors on either side, who work hard to take care of their yards, I also know that maintaining a meticulous yard is not my end goal in life.

I thought of an amazing family I once spent time interviewing and filming for the Children's Hospital. When we arrived at their house, their yard was a disaster. They'd had greater issues to confront, like keeping their child alive, and traveling out of state for additional care. They probably saw their yard with different eyes -- not as a leafy mess, but as home.

I realized we could bite the bullet and pay to have someone haul all of the leaves away. We have done that a few times. It's not cheap -- our yard may not be huge but is surrounded by trees in the back -- but doable.

Only there are times, in my calmer moments, when I think by having someone eliminate the tradition of raking up our leaves, we may end up missing something.

Would we miss out on those moments of looking up at the trees towering over us and watching as the wind wrestles a few free? As they sway to the ground, the kids try to catch them. Anna used to race around with a butterfly net. There are the times we've lain in a leaf pile and enjoyed the view looking straight up at the trees or the clouds. And even the bickering about who does what is fashioning a memory.

Anna hates raking leaves these days and has little interest in leaf jumping. Ethan is almost getting to that point, at least about finding pure joy in leaping into them.

"Eeth, do you still like jumping in leaf piles?" I asked him the other day when we were outside.

"If you rake a big enough pile, yes," he replied. Then he rolled around with Chloe in the pile we'd been raking. But I wonder if those days are drawing to an end. I wish they wouldn't. I wonder -- why do adults never jump in the leaves? I've been telling myself that I need to remember to.

Chloe is young enough that she will marvel at the smallest pile. This is one of the gifts of having a youngest child much younger than the older ones. I treasure the excitement in her eyes at the sight of all the leaves just a little bit more. I know in a way that I didn't when Anna and Ethan first jumped in the leaves: these days will fly by, just.like.that.

But they don't have to. Yes, there will be days to come when we'll find the house quieter and chores easier to manage. There will be days when maybe we'll be able to everything on our to do lists, but that doesn't mean we always have to.

For now, we've found a compromise. We do some of the leaves, and have someone take care of the rest. I don't know, maybe we'll keep things that way. It's great to make things easier. But sometimes hard, and messy, and overwhelming, and what you can work with your hands and breath in with your nose, those things that make you both laugh and cry, are what make you feel more alive. And they are absolutely beautiful. 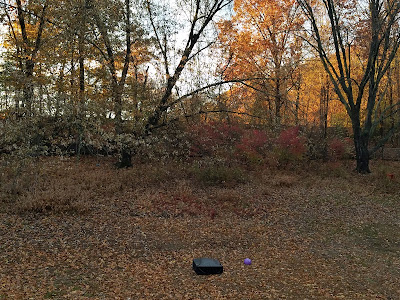 So this year Ethan's school has a new behavioral incentive program called Dojo. I'm not exactly sure what "Dojo" means (Ethan says it has something to do with little monster characters) but the gist is that it's an online point tracking system in which kids either earn or lose points due to various behaviors throughout the day. Staying "on task," for example, might earn a child 10 points while not turning in homework might mean a 10-point loss. Kids can view their individual accounts online (including a circle chart that fills in with either green or red), and of course can earn prizes for reaching a certain number of points.

Ethan loves Dojo. I mean, LOVES. It's visual, it involves math, it's very cut and dry (do this - earn that) and VERY motivating. Aside from a meltdown in gym this year about someone cheating on a game, Ethan has been a model student. We get phone calls. Notes. Messages. I'm told Ethan is a "great role model," "a hard worker," and "wonderful at staying on-task." Sometimes I've reviewed these glowing messages while staring at Ethan, just home from school and screaming, rolling on the floor because I took his video games away, and wondered how one child could be so different in two different places. I know kids as a general rule act better for their teachers than parents but sometimes lately the contrast is just over the top.

Mornings, for example, had become especially challenging. The ultimate "on task" child at school has been rarely on task to get out the door. I've found him relaxing in bed, still in his pajamas with a Captain Underpants book, when it was time to leave in 15 minutes. Homework, getting off screens, leaving the house for sports practice -- these have often turned into me pleading, yelling, coaxing, threatening (sometimes nearly simultaneously). One day in frustrationI shouted out, "We need Dojo in this house!" and it was as if the proverbial lightbulb went off over my head. That was it. We DID need Dojo in our house.

The next day I announced to Ethan that we were going to launch Dojo at home.

"You can't do that, it's copywrited!" was his not surprising reply. "They'll sue you!"

"Yeah, Mojo. The M stands for 'mom.' And we need to get our mojo back around here."

And so Operation Mojo went into effect. It's really playing off a parenting technique I've heard others talk about but that we haven't employed so much. Some say that it's better to have your child earn rewards for good behavior rather than have desired items taken away due to bad behavior. It's less negative. I've shied away from this sometimes because honestly I get tired of feeling as if my child always has to feel as if they are being cheered on and rewarded. Sometimes, darn it, they have to have consequences and they will have to know what it's like to not get their way.

However, I'm also open to new things. Especially when some of the old tried and true ways just aren't working anymore.

Earning "mojo points" means that for each task Ethan knows he needs to accomplish, he earns 10 minutes towards his afternoon screen time. If he needs constant nagging to complete a task, he loses the 10 minutes (but can earn them back). So: eating breakfast and packing up his backpack, 10 minutes. Making his bed and picking up his dirty clothes, 10 more minutes for 20 total, and so on.

We've had Mojo in place for about a month now, and I have to say, our mornings are a lot more pleasant. At least with Ethan. (We've had some interesting battles of wills with Chloe lately, but that's another story...). If it's almost time for school and he's only earned 30 minutes of his screen time, he gets REALLY motivated to feed the kitty and take out the trash to earn more points, for example.

Of course, once he's had his screen time later in the day that motivation fades, but we're working on that. Sometimes the evening's behaviors also count towards the next day's mojo points. Sometimes this doesn't matter and we're still arguing about him practicing his clarinet or doing his reading. Of course we are. He's a kid. But the point is, it's better. It's much more bearable.

So I would like to thank our town's public school system for adopting this program. I'm not sure how effective it is with other kids, but for my literal, visual, rewards-motivated one, it's a godsend: for school and home.

And I'm reminded that sometimes as parents, we have to be flexible, we have to be creative, and there are times we have to throw our hands up in the air and pray for wisdom, because this parenting thing is often not for the faint of heart. I've been doing that a lot lately. And have the feeling I will be for a long, long time to come.