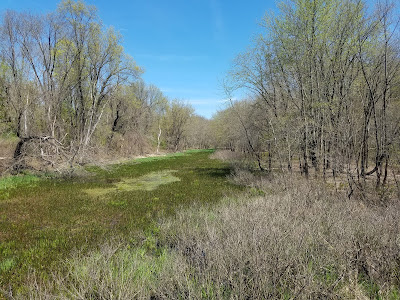 I live in New England, where it takes a little longer for spring to arrive than in some other parts of the country. Sometimes this can feel frustrating. It's a slow transition. Spring doesn't always behave the way it's supposed to. How else can you explain snowstorms in April? Mud lingers. Trees stay bare, no matter how much you will them to bloom.

This is all true, but I've found there's something exhilarating about watching spring come alive slowly.

This glorious transition is the sum of many subtle changes. First -- the sight of a few crocuses or daffodil bulbs bursting out of the soil. At night, one mild evening the peepers call for the first time from a nearby swamp. The grass shifts from brown to emerald green. Before the maples ever sprout their broad leaves the shrubs and bushes show life first. It's a bottom up process. The ground thaws and wormholes finally burst through, evidence of life below.

Like a child in the womb, life begins, change begins before we see it.

There is a stark beauty in bare branches and snow that sparkles. There is always beauty somewhere, even in the bleak seasons. I love how in our darkest, coldest January days, the light is already returning to us before we notice.

Conversely when summer is at its peak the days are shortening, as much as the thought saddens us. But this is the way it has to be.

I love how the seasons are cyclical, how there is a constant ebb and flow like the waves. The is the story of our very lives. How perfect that God would make all of nature to comfort and remind us: there will be peaks and there will be valleys. There will be a time to plant and a time to harvest.

There will be times of great change that feel as if nothing at all is changing or ever will change. Yet the process has been set in motion, and in a time not so very far away, we will see. Like the leaves that unfold after the warm spring rains overnight, making us wonder how we had forgotten what they look like.
Posted by Deb at 5:34 PM 1 comment:

"Oh look, autism awareness month is coming up," I mentioned to Ethan while rifling through his backpack. There was a flyer. The school was doing a lot -- asking people to wear blue; sponsoring a door decorating contest; displaying puzzle piece posters.

Ethan barely registered interest. "So," I asked him. "Do you think you're going to say anything this year?"

Back in second or third grade, or maybe both, during class discussion on autism awareness day, Ethan had volunteered that he was on the autism spectrum. Kids at that age either said that was cool -- or that they were, too. I didn't consider these moments earth-shattering breakthroughs, but was impressed that he'd spoken up. Ethan's always been pretty reserved.

But that was then. "Eh," he said in response to my question. "I don't think I'm going to."

"Why not?" I wondered if it was because we were easing our way into THAT AGE...the one of embarrassment and peer pressure and not wanting to stand out.

"I just don't think my autism affects me that much anymore," he replied. "Not the way it did when I was little. I don't think I need to talk about it." He ambled off to do something -- probably read his coding book.

I stood there looking at the flyer and feeling a swirl of things:

Elation, because he was right. Ethan has learned to manage the more difficult aspects of his type of autism well, particularly at school.

Trepidation, because he wasn't completely right. His autism still affects him in subtle ways, ways that a typical person might pick up on when he might not.

Gratitude, that he was even able to sit before me and voice his feelings about the whole thing so articulately.

Wistfulness, because my role as parent is changing. It's his decision to share this information with others. It's his decision not to. These are the wee baby steps of self-advocacy. But his version of self-advocacy may look different than mine. I'm Mamma Bear. I will err on the side of making excuses to everyone so people will be less likely to make fun of my child. Or to think he's just "weird."

Shame, because those kind of thoughts of wanting to protect my son also reveal my own lifelong struggles of caring too much what others think.

April 2 is Autism Awareness Day. Ethan's autism has made ME so much more aware of so many things in the nearly 10 years now (can it be?!) since his diagnosis.

I'm aware of how a child's special needs can both expose your own ugliness and also shape you into something much more beautiful. It can reveal our ultimate lack of control and beg the question: who do you trust? For those with a faith walk it prods you to ask: is God still good and do I love like Jesus? It asks you to reconsider what we really want for our children, our lives, our selves, and what gives someone value.

Today a big stack of papers came in the mail. Results of Ethan's tri-annual testing, this time in preparation for (can you believe it??) middle school. There was a whole ream of assessments with multiple acronyms. I came to the last result. It was a repeat of the first test they ever performed on Ethan. He's taken it about five times over the years. For the first time ever, he scored just one point below the cut-off for being labeled "officially autistic." Whatever that means.

Because that is yet one more thing I've learned through all of this: the amazing, widely varying spectrum that autism is. Ethan and my brother are about as far apart on it as one can get. Yet thanks to the ways Ethan thinks and acts, the perspectives he shares, I understand more about Andy than I ever could have. I also see some of the beautiful things about autism that are harder to recognize when someone is very significantly impacted.

People with autism have an incredibly different way of perceiving and processing the world around them. It's amazing and baffling and funny and painful all rolled into one.

Ethan says autism doesn't impact him that much anymore. I don't how true that is. Time will tell.

I do know that it has always and will always deeply impact me. And I'm incredibly thankful for that.