Two weeks ago we started a playgroup once a week at what will become Ethan's school when he turns three. I thought it would be a great way to acclimate him to the school and also get a little more exposure to a preschool-type setting. Over the course of an hour, they have free play, circle time, craft time, and snack time. So far it's gone, well...two steps forward and one step back is still one step forward, right?

Maybe the best way to demonstrate is to break the group down into increments:
Getting in the door: Week 1, Ethan walked right in but once he found himself in unfamiliar territory, began obsessing over the microwave, sink and paper towels, and tried to leave once. Week 2, Ethan refused to go in at first, remembering where we were, and instead sat on the floor outside the door. Once I got him to go in however, there wasn't much hanging out at the microwave/sink, but instead he sat on the floor and started playing with some floam (that stuff that looks like Rice Krispie treats that you can smush).
Free play with kids: Week 1, after 10 minutes Ethan went and played alongside other kids for 10 minutes, but then felt so overwhelmed he had to come back to me and start insisting on smushing himself along the floor for 10 minutes. Week 2, he wouldn't go over to the free play area but sat at a table alongside other kids, doing puzzles and playing with the floam and interacting a little with the helper in the room.
Circle time: Week 1, Ethan refused to join the circle, so we sat about 10 feet off and I gave him lots of pats on the back and squeezes to help with his sensory issues/stress. They did no songs in circle time (huh??) so that didn't help, but he did throw a ball back to Ms. Betsy, the group leader. Week 2 (joy!) they sang songs, including Ethan's all-time favorite, Wheels on the Bus, so I was able to inch him closer and closer until we were almost in the circle, and Ethan was grinning ear to ear at the song.
Craft time: Week 1, Ethan was excited to get to paint and did a pretty good job with the brush making his "apple." Week 2, Ethan saw the guy setting up paints and had an extremely hard time not dashing over there. Once we sat down he decided he wanted to paint his hand instead of the paper (his new big thing is finger painting, not brush painting). I helped him paint his "bus," but it was a bit of a struggle.
Snack time: Both weeks (of course!) he sat pretty nicely. Crackers and lemonade are such a nice motivator for all kids, typical or not so.
So there you have it. He's actually doing pretty darned well. What troubles me a little is how exhaused I think both he and I feel after we leave. His exhaustion I can completely understand. I really feel he's doing everything he can to keep it all together. If only I could totally "get" everything that's bombarding him when he does something like this. I've found that the less he melts down (week 2 vs. week 1) the less he interacts with kids, and I truly believe it's because it's taking all of his focus not to want to run out of the room, roll on the floor crying, or do some kind of stress reliever like turn on the sink or flush the toilet.
My own exhaustion is a bit harder to understand and even more difficult to describe. I guess, when we go there I find myself trying SO HARD. Maybe the better word is striving, and I don't mean that in a good way. I'm trying to make sure I get Ethan in the room. Trying to stop him from doing anything inappropriate. Trying to get him to engage. Trying to do everything I can to make him comfortable. Trying to make sure he doesn't tip over the paints or paint someone else or take someone's crackers. Trying to talk to other parents and trying not to talk too much or too little about his situation. I was trying to be brave and not care what anyone thinks, when everything in my human nature was crying out and protesting because there is nothing, and I mean nothing more I hate more in life than standing out from everyone else; being different. I have felt as if I'm trying so hard, I'm literally in a sweat by the end of the group.
And while I keep trying, sometimes unsucessfully, sometimes forgetting there is Someone nearby that could lighten my burden of responsibiilty, I try to remember to encourage Ethan for his efforts. "I'm proud of you for coming in," I whispered through my frustration in his ear, as he only wanted to sit on the floor at first. "I know this is hard for you."
This week there was a teenage boy from the Early Childhood Program at Windsor High School helping out. He greeted us just as we came through the door; I think his name was Steve. Steve has braces and a warm smile and is obviously gifted to work with kids. Right away he tried to interact with Ethan, making him shapes out of pieces of floam, encouraging him as he did puzzles, asking him for high-fives. Steve noticed when Ethan was having trouble not rushing to paint the yellow school bus and made sure we had the wheels to put on our bus before we left. Just before we went out the door, Steve walked up to Ethan and told him he had something for him. Then he put this on his shirt. Just Ethan, no one else: 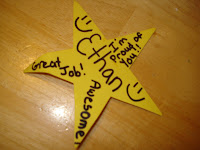