He Loves This Thing! 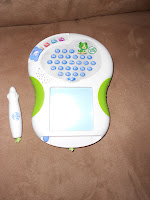 I just have to give a little plug here about a great find we've made. I'm sure most parents have seen this product on the shelves, and I too had seen it around for awhile -- but was skeptical about getting one for Ethan.

I've mentioned before about Ethan's aversion for writing, holding a pen or pencil, and sitting down and coloring for any prolonged period of time. Honestly, it's something not too many boys his age are really into anyway. That has never concerned me all that much -- but in occupational therapy his therapists have really wanted him to start using a more mature grip when he does write, and also to move towards deciding which hand is dominant (we've been waffling back and forth on this one for awhile).

Enter the Leapfrog Scribble and Write. This handy thing basically instructs kids, step by step, how to draw upper and lower case letters, demonstrating first and then having the child trace the letter. There are other modes like free draw or following the lights to trace pictures of objects like a butterfly or puppy.

I thought Ethan would get lost staring at the blinking red lights, or else run in the opposite direction once he realized we were trying to coerce him into spending more time drawing. But he's ended up loving this thing!

Well, a few caveats: we did decide to cut off the string. He needed more flexibility in order to hold the pen the right way, rather than grasping with his fist. I worried of course about him then losing the pen, but the great thing is that you can actually use other objects to trace -- like an unsharpened pencil or a pen turned upside down, if you do lose it. To erase, you slide the button at the bottom and start over.

Also, in one of the modes there are fireworks that go off sometimes, and for whatever reason, that scares Ethan. So we don't do that mode (I think it's lowercase letters, which we really don't need to be working on yet).

Those issues aside, this thing is a hit! I can't tell you how much joy it brings me to see my boy tracing letters (almost exclusively using his right hand now) for 10, 15, 20 minutes, and learning how to hold his pen steady to follow the lights and draw a picture. His OTs last year were basically working on having him draw vertical lines. This mamma can't wait for her boy to show them what he can do now.