The Derby and the Dream 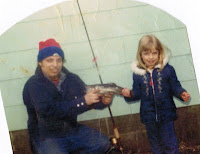 When I was four years old, I won a fishing derby.

It was a muddy, cloudy New England day, and the water up at what we called "The Pool" was just about as muddy as the soft April ground. The fishing derby was an annual tradition for the town's children. What had once been Gilberville's official swimming spot was stocked with trout. And the children came.

I remember the fishing pole was difficult to manage. The thing
was probably twice my size. I remember my dad's arms, steadying me. We cast the line together; there was no way I could manage on my own. I'm not sure how long I stood there holding the pole before I felt the tug. This was a good, hard, strong tug, not a nibble. "You've got something! You've got something!" my parents were shouting. "Reel it in! Reel it in!"

After a little while I needed help...the resistance was too strong...the thing was huge, at least to me, and we were all laughing and tugging until out of the water splashed a mammoth fish. My dad helped me get it off the hook. Not many minutes went by before I, quite possibly the youngest derby participant, was named the winner. I remember someone from a local newspaper interviewing me, scribbling in pencil in a little notebook.

I had forgotten the fishing derby for years. I can't say I fish very often these days and definitely don't like to eat fish. But several years ago, not long before Ethan got his diagnosis, I dreamed about the fishing derby.

In my dream, I was back at the shore with my fishing line. My dad was with me, steadying my arm as we got ready to cast, doing for me what I couldn't do on my own.

You have to cast your care, I heard as a whisper. I don't know if my dad said this in the dream or where it came from. I am here to help you. And wait 'til you see what you'll get in return.

And then I was reeling in that mighty catch. I was laughing again, that carefree, silly laughter of a child, and my dad was right with me, bringing in the reward.

I had to cast in order to reap the treasure. In my dream I felt the joy, the excitement of the unexpected, the idea that I had won. Little me. The victor.

Then, just before I woke up, I heard a Field of Dreams-type whisper: Taste and see that the Lord is good.

I don't have a lot of spiritual dreams. Most of mine are actually a lot of jumbled nonsense, like many dreams. But that night, I knew God was trying to tell me something. That dream awakened long-ago memories of other times with my dad. We'd hike across the fields on Saturday afternoons and build fires in the old Indian caves. We'd roast hot dogs. In the winter the stream that led to"the pool" was frozen and I thrilled at walking on ice under stone brides. We breathlessly crossed the field where the angry bull liked to graze. He never got us. My dad was there. Everything was okay.

There is a secure feeling, a good feeling that comes with just relishing the presence of the Father. We can forget. How easy it is to forget.

I'd like to say that I no longer struggle with anxiety, but that would be incorrect. I am making progress. Some days I make very slow progress. But sometimes when I am at that point of wanting to give up, something awakens my memory back to one of the sweetest dreams I ever had. The one that showed me how to cast my care. The one that reminded me I don't have to do that in my own strength. The one that whispered that God is there and that God is good.
Posted by Deb at 2:36 PM

God ministers to us so personally sometimes, leaving no doubt that it's Him. thank you for sharing such a beautiful, powerful memory. thank you for the reminder that He is He is here and He is our help.

I love this Deb! You evoke so beautifully the feel of your Dad's arms around you, the security and warmth of his presence. Heavenly Father, help us to relish Your presence, to delight in time spent with You, to feel the security and strength of Your arms around us and to hear Your whisper in our ear "I will hold you by the right hand saying to you, 'Fear not, I will help you" (Isaiah 41:13).