You could say I was having a "case of the Mondays."

A check we'd been waiting and waiting for failed to arrive in the mail. Again.

The woman who was supposed to call, who's supposed to help me argue why Ethan should qualify to have a social skills group covered by his health insurance, also did not call.

In Target, while Ethan fooled around with the same buttons in the same aisle he always likes to go to, I saw another mom from his school, another mom of a child with autism, someone who I've been wanting to get to know for two years. Her son is a year older, and she doesn't know me, and once again I couldn't figure out  how to introduce myself without looking like some kind of stalker.

I watched her walk away, feeling a little bit like high school, when I used to secretly watch my "crush" (Ron the trumpet player, if you must know) in the halls and wonder if he would ever notice me. I wondered for the hundreth time why it is that relationship, real relationship with people, is so hard.

This was not a pity party. This was a kind of plodding weariness that comes when you feel as if you've lived the same moments, over and over; kind of like that old movie, Groundhog Day. This was knowing the-chicken-hadn't-defrosted-so-we'd-have-to-have-pancakes-for-dinner. This was telling the kids for the twentieth time not to climb on the big concrete red ball outside of Target or someone was going to fall and smack their head. This was nodding with that famous mom "um-hmm" when Ethan asked me to confirm yet again that our dryer was on the left and our washer was on the right, and again when Anna had to show me one more time how she could touch her ankle behind her ear (while walking!).

This was another opportunity to bite my tongue...take a deep breath...keep believing for the best.

At home Anna took out the blocks -- the colorful, wooden ones. I have no idea why. She rarely plays with them today, but back in the day, when Ethan was taking naps and Anna was in half-day preschool, she and I had great fun with the blocks. Usually we would build a town for her My Little Ponies. The town always had not only houses, but a school, store, church, hospital. The town always looked essentially the same. Anna was too young to notice my lack of engineering vision. Sometimes I just wanted to go do something else, but there was something special about building blocks. I think it had something to do with not just spending time with my child, but also having a singular focus on one thing for a few uninterrupted moments. How often do any of us do that anymore? Sometimes I think I've forgotten how. I think I've forgotten how to not cook breakfast and listen to the radio and check email.

So Anna took out the blocks and asked me to play.

Ethan wanted to join us. I knew what that probably meant: Ethan wanted to figure out a way to knock down Anna's town and make her mad. I grabbed him a toy dump truck and asked if he wanted to fill it with blocks. He started to take Anna's blocks; a tug-of-war ensued. We worked out a compromise over which blocks he could use and which were Anna's territory.

Then we built a town.

And while I made tiny wooden structures I forgot about the pancakes and bills and people I never seem to be able to get to know. For a few small moments I was somewhere else: MiniVille, the land of Anna's Lalaloopsy miniature dolls. Anna was constructing the other side of town. Ethan finished his dumping and started to make a tower -- a complicated one, with all sorts of cylindric spires coming up off the square blocks.

I looked up at the clock awhile later and realized we'd been on the floor for nearly 45 minutes. Forty-five minutes! Anna and I had played like the olden days, without non-stop Ethan interruptions. Ethan had attempted (in his own awkward way) to add to our play themes. The town was still standing. No one was crying. Forty-five minutes!

For a moment, I remembered what it was like to be a child, lost in play...delightfully lost in imagined worlds.

And then it was dinner and clean-up and wrapping up pipes in the basement so our heating bill is a smidge less outrageous and math homework and wondering why the cat isn't eating and finding misplaced papers.

But as I fell asleep, I thought of us playing.

Some days the monotony can deceive us into thinking we aren't going anywhere. Some progress -- for all of us -- is so slow it can only be measured in years. Some victories will probably only be seen in the context of a lifetime.

And I guess sometimes the real victory is what is gained in the process...those concepts that are so great in theory and not so fun in practice. Like patience. Perseverance. Steadfastness.

And sometimes, you just have to get down on the floor and play with the blocks. 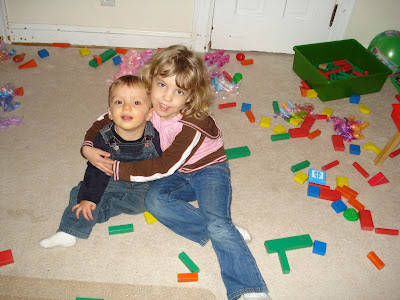 "Let us not become weary in doing good, for at the proper time we will reap a harvest
if we do not give up."  - Galatians 6:9

Oh yes. I get this.
Thanks for reminding me to savor these days and moments with my little ones.