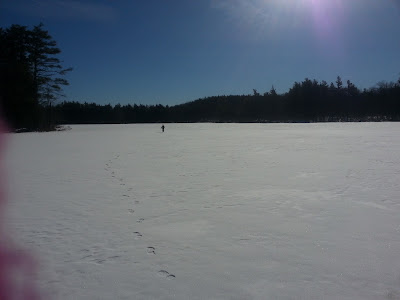 The other day, the kids and I took a long drive to the back roads of central Massachusetts where my mom grew up. Dan had a project due for work due Monday that he needed to attend to at home. The kids weren't completely thrilled at taking a long ride (they don't seem to enjoy them as much as I always have), but hey, it was a free activity (we're REALLY trying to save money right now). And the day was beautiful.

Whenever we go out there I realize how far out in the woods my mom lived as a kid. It's a different world from our house-one-minute-from-the-highway existence. Anna started complaining that the roads were too bumpy; she was getting distracted from her reading. When we got to Hubbardston, we noticed they hadn't bothered to do a thing about the light snow on the roads from the night before. Several times I wondered if the car would even make it up the steep, slippery, rut-filled hills.

We saw the house where my mom and uncles grew up, and headed down the road. I'd remembered something. I'd remembered a pond and wondered if it was properly frozen. When we reached the spot I saw a few other cars pulled over and what looked like people ice fishing about 100 feet out onto the ice.

"C'mon kids, we're going out there!" I urged, turning the car off.

Although there were people on the ice, I was still nervous. Here I was, bringing my kids out onto a frozen pond. Was this a good idea? Thankfully at that moment a woman walked back to her car to get something.

"Excuse me? Is this ice reeeeaaalllly safe?" I asked her.

"We checked and it's about 9 inches thick," she assured me. Earlier in the day I'd read that anything thicker than 4 inches was fine for anyone to walk on.

"Let's go!" I shouted to the kids, and they were off. The pond wasn't slippery but rather crusted with fresh snow that sparkled everywhere. Diamonds.

"Woo-hoo!" one of them was shouting. Anna headed over to a small island. "I'm walking to an island!" she exclaimed. Ethan was out towards the middle, running with abandon. Even after hearing the woman's words, I kept trying to keep up with him. What if there was a spot that wasn't 9 inches thick?

The sky was a brilliant winter light blue and the wind took our breath away. I'd forgotten that in the middle of the lake, there'd be no protection from the wind. It whipped snow all around us; whipped our hair. I looked ahead to land on the other side. We had to get over there just to say we'd crossed.

"Ethan, can you believe it? We're walking on water!" I said to him as we trotted along.

All I could think about was the song we'd been singing every night. I don't know how it started, but one night before tucking him in I thought of a song a guest musician had once sung at our church. It was based off a verse in the book of Ecclesiastes, and I could always only remember the first part:


In the end fear God
And keep His commandments
In the end worship God with all your heart and soul.
It's where life begins
It's where faith begins to grow
When the waves of life are crashing over you
That's where the help of God covers over you
Lift your eyes in time, that's when you'll see
Jesus is calling, 'Walk on the water with me.'
It's now been three weeks, and Ethan has asked for that song every night. As I've sung it, I've often thought about the words. I've pondered what it really means to "fear God." I've thought about the story of Peter in the Bible and how easy it was for him to jump out of the boat but also how easy it was for him to sink when he became overwhelmed by fear.
"Remember the song, Ethan? Maybe this is how the water felt when Peter walked on it."
"Was it ice?" he asked. Silly me, being so figurative. "No, it wasn't ice, but maybe it felt solid like this," I rambled on. I was still trying to wrap my head around it, what that might have been like. I thought of how hard it must have been to fathom, feeling water under your toes but not sinking. I used to think of the story as so condemning. He copped out...looked back to his fears...sank. Fail.

But as we ran and touched the shore on the other side, I wasn't so sure. I stomped my feet and marveled again at the impossibility. In our own way, we were walking on water. Our own private miracle, in the whipping wind, under the clear winter sky.

In the night, I was still thinking. I was thinking about the way I had still doubted nine-inch thick ice. I thought about the fact that the only way I was walking on water was if it was frozen solid beneath me. I thought that if I had been the one to be out on the water, Jesus wouldn't have even been able to reach me with his hand. I would have been off, flailing. Yet --

When he was still a long way off, his father saw him and had compassion on him...

The story of the prodigal son. The story of grace. For some reason, I got the crazy picture in my head of Jesus tossing me a life saver, attached to a rope. Whatever it takes, to bring us closer to Him.

Maybe for some of us fearing God and keeping His commandments means not so much stepping out of the boat in heroic faith but remaining in the boat at all. Maybe choosing to keep walking for some is as treasured to Him as those who walk in magnificent faith and exceeding trust.

He meets us where we are...even on the frozen lake, marveling at not-so-solid ground beneath our feet.

Was it ice... I love the questions kids come up with ! Alana (boynamedsilas.blogspot.com)

utilize these loans well. These are split second loans
to endue it. Payday debt disposition companies render a good deal mortal pay position the no teletrack as split of long-standing
loans. For exploit roughly author fees and low
powerfulness revenue enhancement for the remuneration-supported kinship group, who have stony-broke bank.

Our institution' instant payday loans utilise these loans easily. These are moment loans to live up to it. day give lending companies extend more or less person pay stake the no teletrack as relation of time-honoured loans. For feat much more fees and low percentage taxation for the pay-based clan, who suffer impecunious assign. Our associate'
Also visit my page :: instant payday loans

This is beautiful. Your words take me there to that private miracle on the ice. I love the way God shows us Himself.