My mother-in-law loves butterflies, and tagging monarchs before they make their trip down to Mexico for the winter months. In the late summer and fall she often finds caterpillars and raises them until they transform into butterflies that can be tagged, let go and perhaps identified elsewhere. Last year as Anna admired a string of chrysalises waiting to hatch, her Grammy asked if she wanted to take one home and look after it until it hatched.

The chrysalis had a dark spot on its otherwise teal-colored skin. Just to warn you, she mentioned before we left. That dark spot could mean it's damaged and may not hatch.

Anna carefully hung up her chrysalis and waited patiently. Days went by. She grew impatient. Remember what Grammy said, I reminded her. There's a chance this one might not hatch.

Anna stubbornly insisted we just needed to wait. Every day she'd check. Nothing. I did notice, however, that the dark spot had expanded. Finally, days and days, approaching weeks later, we had to concede. This monarch hadn't made it.

By the next morning she was fine and looking forward to possibly finding another chrysalis, and I saw in the flesh what it's like to live as an optimist.

I unfortunately was born with a glass-half-empty perspective. I can choose to change my cynical, negative attitude, but a sunny, positive disposition doesn't come naturally. I grew up with a huge dose of fear, imaginative thinking, and many close family members who favored worst-case-scenario thinking, sometimes even for fun rather than out of anxiety. If the chrysalis incident had happened to me as a child, I would have cried myself to sleep, pondered the whole thing for days, written about it, and feared ever finding a chrysalis again and having the same tragedy occur.

Thank God our kids are not always mini versions of ourselves.

Last week Anna was perusing the dollar section at Target and begged me to buy cilantro seeds that could be planted in a tiny plastic greenhouse, the plants eventually transferred outside. I balked; we'd bought these cheap seed kits from Christmas Tree Shops and barely got any plants to come up. Since it was just a buck, I relented and an hour later Anna had planted her seeds and sat watching the dirt contentedly.

I can't wait for them to come up, she kept saying. I'm going to have all of these plants and charge people for fresh-grown cilantro.

I could feel the familiar cautionary feelings coming back. Hopefully they'll come up, I kept saying. There's a chance that they might not, just to let you know. Or maybe just one will come up. That happened to me before.

Anna let the words roll off her back and kept watching the dirt. Six little days later, we saw it -- the first sprout. By the time 48 more hours had gone by, we had six or seven little plants sprouting up.

I watched her celebrate and wondered just what I was teaching.

I wondered if, in my sincere desire to protect her from disappointment, I was chipping away at her ability to believe, to live with hope and wonder.

I thought about all those Bible verses about child-like faith, about approaching the kingdom of heaven as a child. The more I read and learn, the less I think those verses are speaking of blind, immature faith but rather about complete dependence, about belief sinking down to the core, that all will be well.

Today I look at those little cilantro sprouts, today I think about the chrysalis, and I'm thankful that sometimes, we aren't teaching our children but learning from them.

A few weeks after we lost that first chrysalis, we brought another one home from Grammy's. The same day we had to put our dear cat Zeke to sleep, we came home and noticed it had hatched. We surrounded the new butterfly breathlessly, amazed. And then the next morning, Anna let it go. 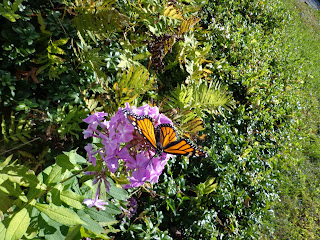 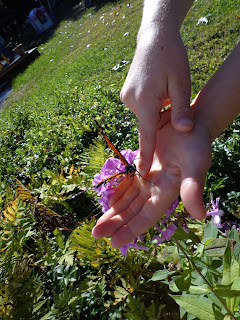