What I Love About Autism 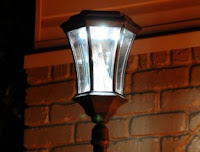 I used to wonder, long for the time when Ethan would open up his mind a crack and let us know what's going on in there, let us know how he sees things.

More and more, we see that happening.

The other evening, upstairs in his room, he announced: "Do you know what I was doing last night looking out the window?" This would mean after we had put him to bed, when it was still light in the almost-summer sky and he couldn't yet sleep.

"I was watching the cars go by." On our relatively busy street, there are nearly always cars to watch before 9 p.m. and after 7 in the morning.

"When the cars go by coming from THAT way" -- he pointed to the right, or south -- "they make a light flash on Mr. John's light." His eyes were glowing with excitement.

I tried to understand what he meant. The house next door ("Mr. John's and Ms. Ann's") is really close to Ethan' bedroom window. I'd say just 20 feet or so. It's very easy for him to look out and into their dining room window, and at their front door and the two exterior, lamppost-style lights to the right and left of it.

"Watch!" he said breathlessly. He peered down the street, following the car approaching with laser-like focus. "Here it comes..." the car whooshed by. I didn't see a thing, except the car's headlights.

"The light! The light the car lights made on Mr. John's light!"

Another car went by. I stared and stared. "There it is again!" he shouted happily.

"It's this one," he said, pointing to the exterior lamp closer to us. "It only happens for a second."

I tried again, squinting my eyes to see as another car went by.

"I'm trying," I sighed. I kept my eyes as wide open as I could. I figured I was blinking and missing it. We waited, and another car made its way by. I saw the headlights. I heard the car pass as I stared at the exterior right-hand lamp affixed to the house next door. And then I saw it. A brief, mili-second flash; the split-second reflection as the rays from the headlamps streamed through the air and were refracted off the glass (or something like that; science was never my strong point).

"Yes!" he replied joyously. "I like that light." He paused and waited for another car. "There it goes!" Flash.

I thought of Ethan as a baby, staring out the window and watching Mr. John turn off his lights. "Ite!' he would call.

I thought of the dreams he can now tell us about, that have involved buttons and timers and pipes and tunnels and storm drains. These are the things he loves.

I thought of him standing there, watching with an intensity most of us can only dream of, capturing a detail the majority of us would most surely miss: that brief flash of reflecting light as the cars go by. Something in him sees that as beautiful.

I wondered how many other small wonders are out there just waiting for us typical people to discover, to joy in...shadows thrown on walls and water spouting from fountains and the dance of a leaf drifting to the ground. There are little miracles all around us. Some of us just see them a little bit more clearly.

This is what I love about autism.

What a neat thing that Ethan noticed! I went to a restaurant the other night with Joe and he said something similar about a spinning globe. At the time we all kind of laughed and thought he was just stimming, but maybe he was seeing something beautiful that we were all missing. Definitely food for thought!

I notice lots of things like shapes in the clouds, symbols, archetypes, images, and I'm a deep thinker.

I love this post! I often wish I could see out of my sons eyes for a day I'm sure he sees the world completely differently than we all do! You did a great job of capturing how wonderful that is!