Why These Two Little Guys Mean So Much 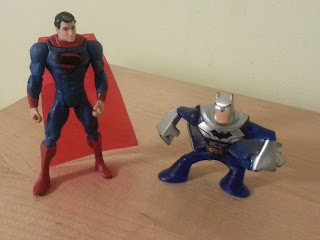 We were puttering around in the morning when Ethan made his announcement.

"When we go to Target and use our spending money, I want to get Superman and Batman," he told me. Anna had her plans as well, to buy clothes for a less than exorbitant price for her new American Girl doll. Anna has always had plans and definitely feelings about what she wants, desperately needs, or could care less about buying.

Ethan? Not so much. But there we were the next morning, getting ready to go to the store, and he was so excited.

This is about your son being two years old and diagnosed with autism, and having no knowledge of autism except its most severe form, and watching commercials with little boys playing with trucks and trains and superheroes and trying not to cry, wondering what the future held.

This is about your son leaving rooms full of toys untouched for months at a time, preferring to swing doors open and closed, and switch lights or fans on and off, on and off.

I used to watch parents of two- or three-year-olds and marvel. While most boys that age not surprisingly do not stay still for long, or sit and listen quietly, I'd notice these boys had a level of focus Ethan did not have. There they'd be, clutching a Matchbox car or Thomas Train in hand, and maybe we'd be waiting somewhere, like to be seated at a restaurant. I'd see these kids sit for a moment, engaged with one toy, perfectly content in their play. I usually had a bag of toys and books and snacks that Ethan would rip through at lightning speed, all while I silently begged for us to quickly get our meal before all of our distractions ran out.

I remember the panic, thinking of taking the kids somewhere like an oil change or to get a tire looked at. With Ethan, there was no way. Bringing a toy (except for more recently, an electronic one) was not going to keep him happy.

And yet -- here we were at the tire place, an hour after getting those two little guys from the toy section, and Ethan was occupying himself by making Superman and Batman fight on top of a stack of Goodyear tires. He's five and a half and this is the first time. These are his very first superheroes.

There's another reason I was almost doing a happy dance in the aisles at Target. Building up a superhero collection means Ethan is also building a repertoire of play possibilities that can only help him as far as getting along with other kids.

What I mean is: if you already have trouble relating to other people, and you don't really like playing that much, it kind of puts a damper on playing with kids your age -- even if you want to.

If Ethan wants to talk about buttons, numbers, or what the hours are at the local stores (his newest interest), that's fine. But, if he actually is showing the desire to play with other kids and only has his old standbys, that presents a challenge. This may not be as much of an issue with some kids on the spectrum (it's a myth that kids with autism don't play at all; most do, they just may play differently) but as I've mentioned before what's surprised everyone is how well Ethan does in certain areas (including relating to others) as opposed to his very limited play skills.

What happens when you start wanting to play but don't have any ideas? I can tell you what happens in Ethan's case. He starts pushing, wrestling, and getting overly mischievous, and as a result actually ends up driving kids away.

But these two little men, the Caped Crusader and Man of Steel? They give him more options. Like discussing Angry Birds or levels in the newest Mario game, they give Ethan ideas, or a starting point for play and communication.

And yes, I feel the need to say, to the invisible Dr. Milanese always whispering over my shoulder: His play with Superman and Batman was, as they say in the autism world, "scripted." He mostly acted out scenes from a game he's been watching Dan play on his phone. I know, I know. And I don't care.

I don't care, because Superman and Batman ate lunch and dinner at the table with us, and stayed clutched in Ethan's hands throughout the evening, then got tucked into bed with him. And for about $10, my little guy is blissfully happy.

I get this and all that it means/represents. :-) Hooray for him and you!