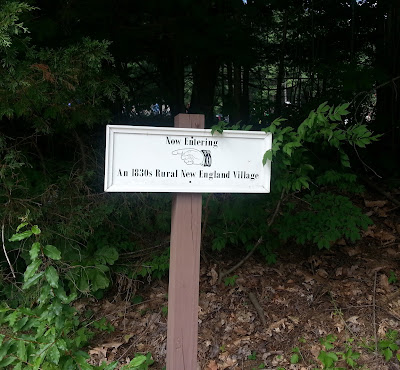 We'd been waiting in line for close to a half-hour to take a 20-minute ride down the Quinebaug River after three hours of fighting crowds at Old Sturbridge Village.

Old Sturbridge Village, in case you're unaware, is a recreation of an 1830s New England village complete with historical buildings you can wander in and out of, costumed interpreters, stage coach rides, and nature walks over covered bridges and through the woods. When I found out kids go free in the month of August, I thought we'd spend a day checking it out just before school started again.

What I didn't know is that it was also a $5 Friday, meaning adults got in for just five bucks. Apparently everyone else was aware, which is why there was a line of hundreds of people lined up to get in when we arrived.

I knew taking Ethan would be a risk, of sorts. He's a boy. He's five. He's not exactly a student of history yet. Not even Anna had seemed that interested in the concept until just the last year or so, particularly after getting an American Girl doll from around the same time period.

At first, we fared pretty well. When we're at places like this I've noticed Ethan likes to find a, shall we say, quirky activity to keep his mind occupied. This time around it was to see which buildings had upstairs rooms we could visit, which things we could/could not touch, and to find secret areas other people had missed. We had made it through several settlers' homes, the Quaker Meeting House, the church, the general store, and a few barns without incident. Anna, in the meantime, was completely enthralled. I've never seen a person want to read every.single historical sign on display. The antithesis of Ethan, she wanted to spend longer than the average person in each building.

As a result, we'd been there for three hours and seen less than half of the place. It was lunch time but due to the crowds near the food area I thought we'd try to eek it out a little longer and let things calm down.

Unfortunately, Ethan was not calm. First, there was the little issue with him not wanting to leave the barn with the ceramic cow he could milk and a couple of educational displays that involved a ball rolling game. What do you get when you combine an overtired, stubborn five-year-old with a dash of autism/resistance to change mixed in? One heck of a tantrum. And of course it had to occur in front of 50 people observing some sort of oxen demonstration outside the barn. Nice.

But Ethan recovered and we soldiered on through another home, this one a mansion by 1830s standards. I bit my lip to stop myself from telling Anna to hurry up. The girl was drinking in information left and right, but when we walked back outside and I saw the sign for the boat ride, I knew what we were doing next.

There were a few other wrinkles, we realized as we walked down a path through the woods to catch the boat. One was that there were about 75 people in front of us and each boat only held 15 people. The other was the darned musket demonstration.

If there's anything my kids (and especially Ethan) hate, it's the sound of guns being fired. Every demonstration during a Memorial Day parade ends up in tears. Ethan puts his hands over his ears and is petrified to take them off until he knows there's no threat of it happening again.

Now here we were, waiting for a boat in an endless line, and just past the trees where we couldn't see but certainly could hear, someone kept firing off a musket. Ethan started whimpering and clinging to me. Then he got mad. This is his new thing, truly expressing himself for the world to hear.

"This is terrible! This boat is being very bad. It needs to come now." Then he'd go back to covering his ears, looking panicked through the woods towards the source of the sound. I scanned the river for any sign of the boat. Boom! The shot rumbled again. Ethan got even more vocal.

"This is your fault! You brought us to this place!" My fault? Where had he learned that? I almost wanted to laugh, but it sounded a little too much like me nagging Dan, which gave me room for pause.

The wait and whining continued. I consulted the flyer we'd been handed when we came in and learned the demonstration was supposed to go until 1pm. It was 1:15. When would this end? I wanted to get on the darned boat and have some darned peace and quiet.

Then I saw her. And heard him. In front of us stood a woman about my age and her husband, grandparents, and a boy a little older than Ethan and a girl a little younger.

The boy was whining (so was his sister). Every time the shots fired, he covered his ears. Then he started crying and whining. "I don't want to go on the boat. I won't like it."

"You'll love it," everyone tried to reassure him matter-of-factly.

"No I won't. I'm afraid of it. I want to do something else. I'm hungry!" The whining continued. He wrapped his arms around his mom's waist, burying his head in her.

She looked back at me for a second. We exchanged glances. A look passed between us in a split second that said, I know.

I have no idea if this boy had autism or any other "issues." I don't know if he was just a cranky, uncooperative little kid. I'm not sure if it matters.

All I knew was this: somehow we had ended up in line together. And this woman with the shining black hair and perfectly lip-sticked mouth, the type who would appear so perfect to someone at a quick glance, had been watching my son try to keep it together, and she hadn't been judging. She'd been finding a measure of relief to know she wasn't alone.

Suddenly the tension eased out of the back of my neck like air seeping from a balloon. Suddenly, I could let it go: Ethan's antics and even the tantrum from earlier. I thought of the people who may have been watching. Yes, someone out there probably thought I was a crummy mom who didn't discipline my child. But someone else may have been feeling empathy. Someone else was thinking, I've been there.

I remember reading something in a book once, by a woman who's son has fairly severe autism. There are things that happen to you, she had written (I'm paraphrasing here), and it's obvious what you're supposed to learn from them. And then there are times things happen to you that you don't quite get. And sometimes that's because they are happening to benefit someone else. There is something that will be learned or gleaned from the situation that will help someone, soon or who-knows how much later down the road.

Eventually the family in front of us gave up waiting and went to look for some food. We got on the boat at long last and got a sweet respite from the crowds. After, Anna continued through the buildings at a meticulous pace. Ethan and I spent a lot of time outside. He found rocks to throw, dirt to play in, and a pottery kiln he may or may not have been supposed to climb in. We did our thing, and it wasn't perfect, but it was real, and I was glad to have been reminded that sometimes, it's okay to have those moments we hate. Because maybe someone else needed to see. Maybe it's not all about us. Maybe just by living, we can help encourage someone else. 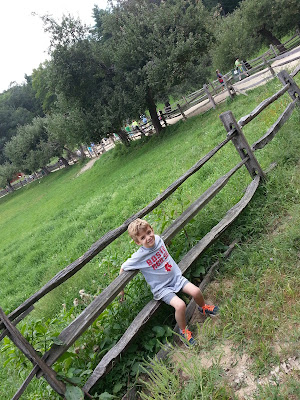