Math on the Highway 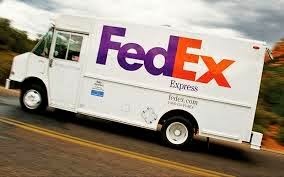 Driving Ethan to school each morning, it's all about the numbers.

We've learned that it's best to leave at 8:20. Our plan used to be to listen to the morning show on XM radio's Kid's Place Live and hear the birthday greetings at 8:30. But now that we're arriving at the school at closer to 8:28 to beat the crowds, we miss that. So we've come up with a new plan.

A while ago we noticed that if we were driving down the highway just before 8:30, a bunch of Fed- Ex trucks were on the opposite side, heading south. I realized that the Fed-Ex headquarters are not far off a certain nearby exit and that many of the trucks must leave at the same time, every day -- right when we're driving by. So we started counting them.

Sometimes I think me and Ethan are two peas in a pod.

Our record was 33. One day we saw only 2. After a while Ethan decided to count school buses and leave the Fed-Ex watching to me. So now on any given weekday morning, you'll find both of us craning our necks and counting on Interstate 91, trying not to get confused by the other person's numbers.

Hey, his first grade teacher SAID to make everything a math problem, to look for opportunities to count and do math in everyday life.

The one problem with Ethan counting buses while I count Fed-Ex trucks is that quite often there are more trucks than buses. This presents a problem to Mr. Competitive, whose eyes inevitably fill with tears if he falls behind.

Now we've worked out an "exchange" of sorts, that throws subtraction and addition into the mix as well. If I'm ahead, I work with Ethan to figure out how many of my Fed-Ex trucks added to his buses would make things equal. So, for example, today I had 17 trucks and he only had 9 buses. But by subtracting 4 and "giving" them to Ethan, we both ended up even at 13. This type of thing makes him very happy.

During the morning commute, some people are attempting to wake up, or belting out songs on the radio (okay, the latter could be me, at times). We're counting and crunching numbers. This is how we roll, in our family. Yup. We're getting our inner quirky on.

Yay for taking advantage of an everyday learning opportunity, and essentially teaching algebra! I love reading about Ethan's progress and your take on life.