Baseball Season is in Full Swing 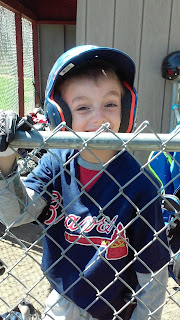 This past week it just.would.not.stop.raining. Even better, Ethan had not one but three baseball games.

Game one, the sun actually came out for a few minutes. That would be the last time I'd see it for five days. Chloe kept inching dangerously close to the small ponds that had formed under the playground swings. Game two involved temps in the forties and bone-chilling winds. The woman next to me in the bleachers had wrapped herself in a blanket. Ethan stood in the field jumping up and down, trying to stay warm. And game three began with an outright downpour and me wondering what it might take to actually postpone a Little League game in our town. Another game and a girls' softball practice were happening simultaneously as the heavens opened above all of us. People sat huddled under umbrellas looking miserable. This time Chloe did indeed walk through a puddle of epic proportions rather than around, gleefully.

Yes, spring in New England is not for the faint of heart. And weather this baseball season has been sub-par. But that being said, we are halfway through now, and I have been pleasantly surprised. We were not sure how the leap up to "Double A" ball was going to be for Ethan. They actually keep score now. You can actually strike out. These kinds of things have been problem areas in the past. Five games in and Ethan has probably only gotten about three or four hits. But the kid is having fun. He gets up to the plate, pounds his bat on it and assumes his batting stance. He (at least attempts) to cleanly field the ball. At the end of the game he willingly goes and slaps the hands of kids on the other team ("Good game! Good game!..."), even if his team lost.

Our only issue (there seems to always be at least one) this time around is actually getting to the game. Minor qualm here: the games seem to be at the worst possible time. I'm sure if I think about this, there is no great time to have a weekday game. But 5:45 is pretty difficult. Especially if they tell us to get there 20 minutes early to warm up. Especially if we normally eat dinner right at that time. And especially if your child really, really needs to have his video game time after school before he is motivated to do anything else.

We are counting down the days until third grade when Ethan moves up to the school behind our house and will have a chance to walk there and back for the first time. Right now, he has a very long bus ride. After a full day of school and dismissal at 3:25, he doesn't arrive home until a little before 4:15. We've learned at that point, he NEEDS to decompress and do something for him. That of course, means WiiU and Minecraft or whatever game he's into at the moment. We give him an hour before dinner to "recharge."

Only -- with baseball games, he no longer gets an hour. His video game time is cut in half. In Ethan's world, this is criminal.

I totally get it. I know what it's like to get home after a long day only to realize after sitting for a moment I have to rush somewhere else. And so, I try to be understanding. And accommodating. And patient. This is sometimes easier said than done.

First, we make sure to use the timer. Always the timer, with 10 and five-minute warnings before time is up. I steel myself for the comments, because inevitably when Ethan has to stop playing Wii early, he immediately bursts out with all sorts of overtures about hating baseball, not wanting to play, wondering why he has a game and why we are forcing him to do this. If he said this all of the time, I'd be concerned that we really were pushing him to do something he doesn't want to do, but he always stops after about five minutes. Then he wants a snack. Only I tell him he has to get on his uniform before he has a snack (the other day I finally got smart and told him he had to put on his uniform BEFORE he started playing Wii. Duh!). So I give him one snack to have as he's getting ready in the house and we are frantically trying to find his glove, helmet, etc., and another for the car. That's the thing. We can't eat dinner first. Just can't, at least not at this stage in his life. Screen time rules. So I ply him with snacks so he's not completely sapped of energy for the game.

After the game (even the six-inning games they play at his level go until almost 8pm!) he comes home, inhales his dinner, and wants his other 30 minutes on Wii. We attempt to accommodate this. He lives for this. I feel as if it's the least we can do, when the kids been standing in a wet field freezing for 2 1/2 hours. So we've made this thing work.

I can't really complain. He's doing pretty well. He seems to enjoy baseball and if he's in the right mood is even inspired to do better. We've been spending some time watching Red Sox games (I'm already training Chloe to say "Yankees, yuck!") and he gets really excited to see them make great defensive plays or get big hits. When someone strikes out I'll always throw in something like "See, he's not throwing a tantrum" just to get that point across. I'm waiting for the day someone does argue and gets thrown out of the game ("See? They had consequences for their bad behavior!").

Already he's talking about how he can't wait to play in the next level, to move up to Triple A in a few years. In Triple A, according to Ethan, they get to steal bases. I've gently reminded him that Triple A means nine-inning games. I thought about that briefly and how that would work, with this whole screen time thing. Then I remembered Ethan will be walking home from school and back home almost a full hour earlier. Maybe we could squeeze in the whole block of screen time then. If he wants to do it, we'll make it work. We just need to be creative and flexible. Like we're always telling him to be.