We were having a rough morning.

It all started when Ethan got extremely frustrated when we told him to turn off the WiiU the day before and lost his temper. Badly. Every time I see something like that happen, warning bells go off in my head. I think of all of the articles online that tell us that too many video games are turning our kids into monsters. Then I also think about the fact that Ethan isn't every kid and he may need them a little more than average. Finding that middle ground is always a dance.

But being out of control just can't be acceptable, because a lost temper at age 8 can morph into something much scarier at age 16. So Ethan knows if he has big trouble transitioning there will be consequences. The worst consequence of all, of course, is no Wii the next day -- which is exactly what had happened, and exactly why the next morning Ethan was having trouble getting out the door.

"I can't go to school. There's nothing good about this day," he kept telling me. He asked me if I'd change my mind. He insisted he had to have Wii or he couldn't get through the day. He begged, if we wouldn't give him Wii, if we would at least tell him the screensaver password for the computer. He's always trying to figure that out so he can sneak onto it when we're not looking.

The answer, of course, was no. The questions and demands kept coming, and we were starting to border on being late. These days Chloe and I walk Ethan down to a major intersection where Ethan crosses and heads over to the school. The process takes five minutes. If we could ever get out the door.

"Ethan, you're letting Rock Brain win," I told him, bringing up a character he's learned a lot about from the Social Thinking curriculum in social skills group. Part of the Social Thinking approach introduces a cast of characters (think superheroes and villains) called the Unthinkables that, according to Social Thinking's website, work to "distract, disengage, and otherwise detour children in their efforts to think about others and use their social thinking abilities." Rock Brain is one of them.

"And I'm Glassman," Ethan acknowledged quite willingly, referring to the guy who overreacts to situations. In Social Thinking, kids learn that they can be "SuperFlex," or the superhero in their minds that promotes self-regulation, social thinking, and related social skills. In kid terms: SuperFlex can beat those bad guys up.

And that's just the thing. I love the SuperFlex and Unthinkable concept. Ethan does, too. But when we start talking about it, I feel as if we're dancing a fine line. Now that he knows about his autism, I don't want to think that he's at war with the autism inside of him. But I also don't want him to think he's completely helpless when he starts feeling out of control.

It doesn't help when he at times uses his own dramatic language to describe what's going on. "I can't help it," he said one day. "I'm giving in to the dark side. I don't want to do the right thing."

What always seems to happen is to cajole him back. "Luke (Skywalker), Luke, don't give up! Don't give in!" I'll tell him. "You can win!" Or, when we're talking about the Unthinkables, I'll encourage him to fight back. He loves battles. He loves good vs. evil. He loves to feel like the hero, i.e., Superflex.

But again, there's that thing. Evil. The Dark Side. I always wonder how to approach this in a way other than that he's slaying his autism dragons. The best solution I can come up with is to talk about the way we ALL have Unthinkables. It's not an autism thing. It's a human thing. Some of us may struggle more than others. But we all need to work, in some way, on having more self control...or not getting distracted...or not bossing others around.

And some days, yeah, we just feel like giving in to our more base instincts.

"I'm not Ethan, I'm Rock Brain," he announced, slowly getting ready to head out the door. "Ethan's too weak to fight him." We trudged out the door and across the street.

I hated to see him head off to school upset. Isn't that the worst way to start the day with your kids?

"I'm sorry you're still Rock Brain," I told him. "Tell Ethan I still love him and I can't wait to see him later."

He worked on wiping his eyes. We had reached the place where he needed to cross.

He turned at the last minute. "Okay," he said slowly with a sigh. "I'm Ethan again!" Then he gave me a hug before he had to cross.


For reference, these are the original Unthinkables: 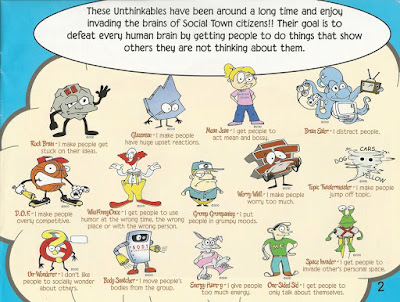