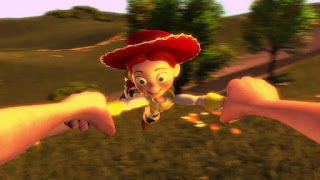 There's a scene in the movie Toy Story 2 in which the cowgirl doll, Jessie, heartbreakingly recounts how the girl who previously owned her slowly grew up over the years and lost interest in what was formerly her favorite toy. The doll ends up discarded under the bed, gathering dust, until the day the girl finds her and Jessie hopes against hope they will play together as they once did. Unfortunately, the girl throws her into a donations box and ends up abandoning Jessie on the side of the road.

That part of the movie had me openly weeping the first time I saw it. Both the second and third Toy Story movies have a way of doing that, don't they? These films follow the lives of what are actually inanimate objects, experiencing all sorts of heartache and joy. The toys come alive in such a way that after watching years ago Anna felt really bad for the My Little Ponies she'd shoved under her bed.

I don't think we'll be re-visiting the Toy Story movies anytime soon around here, because we are experiencing what I'd call "empathy overload" with Ethan -- and to say it's a little unconventional would be an understatement.

This is the thing: They say one of the hallmarks of autism (well, maybe not hallmark; more like a common trait) is difficulty with empathy (specifically defined as the ability to understand and share the feelings of another). But I will argue, as I have before, that sometimes the issue is not feeling the empathy -- it's feeling too much, and not knowing what to do with those feelings.

Ethan has gone through this phase lately that has progressively gotten more intense. It started with him getting rattled anytime I said "Awww." So if I suggested he wear a certain shirt, and he said no, and I replied, "Aww, I thought you liked that shirt" he would be bothered. A lot. He'd ask why I said "aww," and tell me how it made him feel bad, and bring it up before bedtime.

One incident like that in a day isn't such a big deal. But we've started to realize there are more moments like that throughout the day than you might realize. Especially if you're paying attention to other people, too. So Ethan started telling me he felt bad when someone couldn't get to the ball in gym class and was disappointed; or about something the teacher said; or something he saw on TV.

One evening at bedtime when he was falling asleep without using his pillow again I asked him why he never uses his pillow. Then he started to feel bad because he thought he had made me feel bad by not sleeping on the pillow, AND he felt bad for the pillow.

When he started saying he felt bad every time there was a choice to make, that one of the choices would be left out, I started to be concerned. Our days are filled with choices. Getting worked up about every single one could be crippling.

Thankfully, he's backed off that a little bit, but I'm still feeling bad about his feeling bad. Some nights before bed he's said his mind is full of all the things that happened during the day that made him sad: the ball that dropped, the moment I asked why he wasn't going to eat all of his chicken, the fan that broke that we'll now have to throw away.

We've had a lot of talks about this, and I usually reiterate the same points. I'll remind him that me or the other people that these things happen to are no longer sad or thinking about it (i.e. the dropped ball), so why should he? If it involves an inanimate object, like a toy running out of batteries, I remind him the toy doesn't have feelings. Movies and books sometimes make objects more real than they actually are, but really they are just objects without thoughts and feelings.

I can only imagine what watching one of the Toy Story movies would do to him in this state. Would he pull out the many toys he's ignored over the years, trying to give them all proper attention? I don't know.

Is some of this related to anxiety, or maybe the tendency for people on the spectrum to be rather obsessive or perseverate on small details? Maybe.

I think it most definitely has to do with developing a healthy dose of empathy, and that's a good thing. I don't want my child to start crying thinking he's made me upset by not using his pillow. But the idea that he's placing himself into my head, and trying to feel what I'm feeling, is an important milestone.

If you're autistic and your brain is wired a little differently, it would make sense that you learn and experience empathy a little differently. Maybe it's not baby steps and simple milestones building slowly over time. Maybe with Ethan it's an explosion of emotion that sometimes feels too hard to handle. Our job is, as always, is to help him navigate and come away with something useful he can carry with him always.

Great article! I think this sheds some light on some frustrations at our house and I'll be thinking differently when trying to talk to my kids about feelings.

Excellent blog as usual, and great life lesson, whether we are dealing with autism in an individual or not. Thanks for sharing.