A Bat, A Ball, and A New Way of Thinking 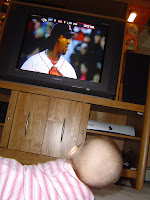 
Spring is in the air and after mentioning them in a post recently, I realized I had to talk about the Red Sox. I had to explain why this group of guys seven years ago helped me begin to change the way I think about life.

Growing up in central and later western Massachusetts, the Red Sox were just there. They were an extended part of the family. They were in the background during family dinners and crackling on the radio on sultry summer evenings. I learned the game of baseball by watching them. I had my first crush on a certain young pitcher named Roger Clemens who struck out 20 batters on an April evening when I was 11 years old.

That was 1986, the year this shy, awkward girl with few social outlets became a true Red Sox fanatic. I made a Red Sox scrapbook. I memorized stats. I plastered posters of my favorite players on the walls. I huddled under the sheets and listened to games on my radio, long after I should have been asleep. I attended my first game at Fenway Park, dazzled by the green of the grass, the blue of the September sky above.

Then later that fall, the ball went through Bill Buckner's legs, and the Red Sox broke my heart along with everyone else's. I refused to go to school the day after they lost. I had bragged to the popular kids on the bus (New York fans, those western Mass. traitors!) that the Sox WOULD undoubtedly win. They had all laughed, and I ended up being a coward. I couldn't face them.

Before the Red Sox broke my heart, I hadn't fully realized that they had broken everyone else's heart in New England time and again over the course of generations. I hadn't paid attention to talk of curses or understood that while everyone seemed to passionately follow the team, they also expected them to lose. They almost waited for the pain, in some way masochistically enjoying its inevitability.

In my home those days, things weren't so great. When the Red Sox lost that fall I was forced to pay attention to real life again, in our cramped apartment where my brother (then 4) with autism was wreaking havoc. Worse than the havoc was my family's sense of powerlessness. "Why do bad things always happen to us?" I remember my mom questioning aloud. To me that sounded awfully reminiscent of the Red Sox. Were we cursed? Destined to always struggle? In time, I began to pick up that mentality and wear it like a very heavy cloak -- and still follow the Red Sox, now expecting them to lose. It was better not to hope. I would be safer that way, keeping expectations low.

Fast forward to 2003. The Red Sox came breathtakingly, agonizingly close to beating the Yankees and going to the World Series -- only to lose in horrific, last-minute fashion once again. My boss, a Yankees fan, sashayed into work the next morning with a smug smile on her face. The rest of us glowered and all of those feelings came swirling up to the surface. The inevitability. The pointlessness of believing the impossible. Can a team really drive the way one thinks about life and faith? This sounds implausible, but when it's complementing an already present struggle with inferiority, when that kind of victim mentality is already permeating the atmosphere around you, I'd have to say yes.

And so 2004 arrived, and along with the rest of New England I crawled back to following the Red Sox. By fall I was amazed to witness what was lining up. The Red Sox were going to have to play the Yankees again if they wanted to reach the World Series. In other words, they were going to have to face their demons.

They lost the first three games of the American Leauge Championship Series. The third game, the Yankees demolished them. New England gave up all hope. No team had ever come from three games down to win the ALCS. We were in Maine the day after that game, eating in a restaurant, and I remember the murmured talk about the game, the subdued atmosphere. Everyone's step seemed slower; laughter seemed muted. It was happening again, and the Red Sox were finding new ways to rip everyone's heart out.

I often wonder what it must have been like to be a Red Sox player, always playing under the weight of horrible expectations. Not low expectations. Expectations that they were going to screw up, and bad. Sometimes I wonder if Bill Buckner somehow felt the burden of it all just before the ball went through his legs. I know I lived many years in that kind of thinking. It's no way to live, believing that some force beyond your control is going to rip everything away from you.

But that year, the year everything changed, the Red Sox had a team of self-described "idiots" who were too ignorant to know or care about the failures of the past. Pitcher Curt Schilling at one point posed a question to the team: "Why Not Us?" The team had T-shirts made bearing the slogan. So matter-of-fact. So flippant in the face of years of history and tragedy. Why couldn't they win? Why not decide who cares what happened before? Why not just play. Just win one more game and who knows what will happen?

The rest, as they always say, is history.

During that amazing run when the Red Sox came from three games down to beat the Yankees, then swept St. Louis in the World Series, winning the final game under a lunar eclipse, I learned more than one might think the baseball playoffs would teach a person.

I learned good things really do happen when we believe. Faith doesn't always end in heartache.

I learned there really wasn't a curse after all, except perhaps for the curse of damning yourself with your own thoughts -- and that somewhere deep down, I had known that all along.

I learned that just because something happened a certain way a hundred times before does not mean the one hundred and first time, it's going to happen that way again.

I learned the sweetest victories are those that seem impossible and come after much pain.

This is why, while they are an overpaid bunch of guys playing a little boy's game, the Red Sox will always be seared onto my heart.

oh yes, girl. i'm with you. i'll never forget 2004. rhema was born that year, husband deployed to iraq, and the Yankees were running around and around the bases. didn't they score like 19 runs in that 3rd game? but after that the Sox couldn't stop winning. never give up! right?

lemme know if you make it up to fenway for a game this summer!

I would LOVE to get up to a game this summer. We didn't go last year but the year before that I sat in the "Monstah" seats for the first time. I will let you know. Oh yes, and the score was 19-3 that game. It was the day of my sister-in-law's wedding in Maine. I will NEVER forget that entire experience!!