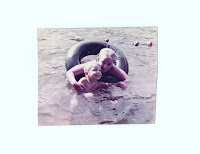 I must write about my brother. So often when I've spoken of him, the words have not been the most encouraging. I've mentioned often the severity of his autism, his destructive tendencies (mostly in the past, not today), the chaos that swirled around us when I was young due to his autism and my parents being overwhelmed about how to best help him. I've said a lot about all of that, but what I haven't said is this:

Andy is an amazing person. He is a champion walker and hiker. He could walk for miles and hike up mountains and most likely leave me in the dust. He learned how to swim one summer just by jumping in the water. Out of the blue -- splash! -- Andy knew how to swim. He did not speak for years and years, until one day when he was 8 or 9 and started singing "Happy Birthday" in the car. He loves music. He loves vacations, riding in the car or in boats, and water. He loves his family. We just have to be watching for the subtle ways he shows us. He, indeed, shows us many things.

Now that I know more about autism, I wonder today as I didn't when I was growing up how Andy must feel in this world that is, well, foreign to him. I wonder what sounds, sights, and sensations assault him and stress him. That part breaks my heart, but then I remember again how even with the degree of his disability, Andy has learned to get along in this world. He can tie his shoes. He can ride a bike. He can request things he wants. He goes to a job and works, with assistance. He lives in a nice home and gets to do activities he enjoys.

Andy can do all of these things, yet he had none of the benefits of education and therapy so common today, for the first at least 5-7 years of his life. In the mid-1980s, he was placed in a special ed. classroom with a group of children who had entirely different (mostly physical) needs. Most of the time they let him play in the sink for a good portion of the day. He had no speech therapy, no occupational therapy for years. I was going through old papers with my mom and saw that Andy must have been in school 5 years before he had anything that resembled the type of IEP's (Individualized Education Plan) we see today. There was no organized plan for him, until my parents started fighting for a better way. He switched schools many times, and still my parents fought. Finally, the school system agreed to pay for his placement at Boston Higashi School, where he went to live when he was 9.

Andy was nine years old and went to live 90 miles from his family. I sometimes wonder if he was scared. I'm sure those thoughts danced in my parents' minds often, but when Andy came home to visit, we could see how much he enjoyed school. He was LEARNING. Higashi School gave him the discipline, the organization for his body and mind, that Andy so desperately needed.

When I was a teenager and would babysit Andy, sometimes we'd have these moments. I'd notice something as small as a food we both liked to eat, or a song we both responded to. I liked to sing to my brother. I remember on summer evenings, while Nate (my other brother) played outside, and Andy started to calm down and wind down, I would sing him songs from church. In those moments, I forgot about the way Andy ran around our house, making noise and messes, the way he was so different and so difficult to understand. In those moments, he was like me. We both loved music. And something from God spoke to both of us within the songs.

I wish I knew my brother with autism better -- but know that I know that I have connected with him, and I cherish those moments.

There are other things I could say about Andy. I could talk about what he teaches me and all of us about the eyes of God, and selflessness, and about what really matters in this life. These things are all true, but right now I will let them rest because Andy is also well, a wonderfully complex and most definitely imperfect human like the rest of us. He's a guy approaching 30 years old, a son, an uncle, even a friend to his buddies in the group home.

thank you for writing about your brother. i don't know what to say, i have tears. i see my Rhema in Andy. i see my Hope in you.