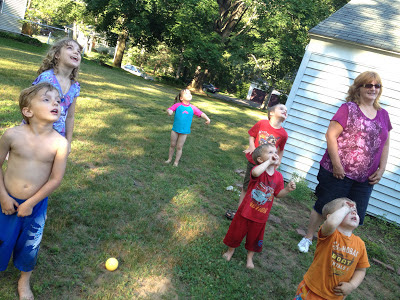 Anna had the idea first, I think at her 7th birthday party.

Instead of hoarding all the pink and purple helium-filled balloons, instead of keeping them inside until they drooped and withered, or instead even of handing them out to people to take home, she wanted to gather everyone and simultaneously let them go, up to the sky and out of sight.

It's funny...as a child, I would have been traumatized. I was the kid always crying over the balloon that got away. I remember losing a balloon at a Memorial Day parade and still whimpering over it in bed that night. I kept seeing the balloon in my head, small and red, drifting away, cold and lonely somewhere. It just about broke my heart.

But Anna had different ideas. And so we gathered in a circle and counted down and of course someone let theirs go early and someone's almost got stuck in a tree, but we let them go.

This year, she wanted to let them go again. And in October, when we were celebrating my mom's and brother's birthday, they too decided we should go out into the yard and have a balloon liftoff ceremony. Now Ethan is asking me if we can let balloons go at his birthday.

I was thinking about this the other day, picturing the myriad colors wafting into the sky as we all squinted to see until they had truly disappeared.

The balloons looked pretty enough scattered about the house and in the yard, for the few hours before they began to sag and droop. But when we opened our little and big hands and watched them all get caught by the wind...now that was something spectacular. That was what had everyone talking. That's what had everyone looking skyward with wonder.

I can't help but ask what happens when we live our lives with this same open-fisted posture.

We can hold on tight and try to order our little worlds and think we have all of the answers to how it MUST go.

But sometimes, letting go is ironically what brings us the most freedom.

Those balloons never soared until someone let go of them.

And better yet, Anna helped remind me that sometimes, actually, letting go can be downright fun.

As Beth Moore has said, talking about the tragedy of living a boring life, hands knuckle-gripped to the steering wheel you've wrestled away from God: "It's not a wild ride if you're the one driving." 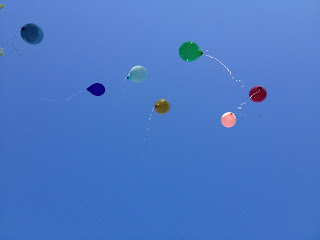