I hear it often, when people talk to me about Ethan, particularly people who don't know him very well.

"Oh, I never would have known he's on the spectrum"..."He doesn't really stand out from his peers"..."Really? Autistic?"

And I can understand where they are coming from, because if you just have surface interactions or spend a few minutes with him, Ethan basically comes off as just a regular kid. You may not notice he doesn't prefer to look you in the eye. You might not see that while he does like playing with other kids, there are many times he prefers doing his own thing (especially after school, when he's had to exhaust himself socially all day).

He's been having a blast playing basketball next door with the neighbors' boys. I asked him the other day which he liked better: the big basketball hoop he gets to use over there, or his friend (I'll call him "A"). His reply?

"I guess the basketball hoop, but if he was there I would say him or that would hurt his feelings."

Well, I'm glad to know he's picking up something from the social skills group.

And then there is this: 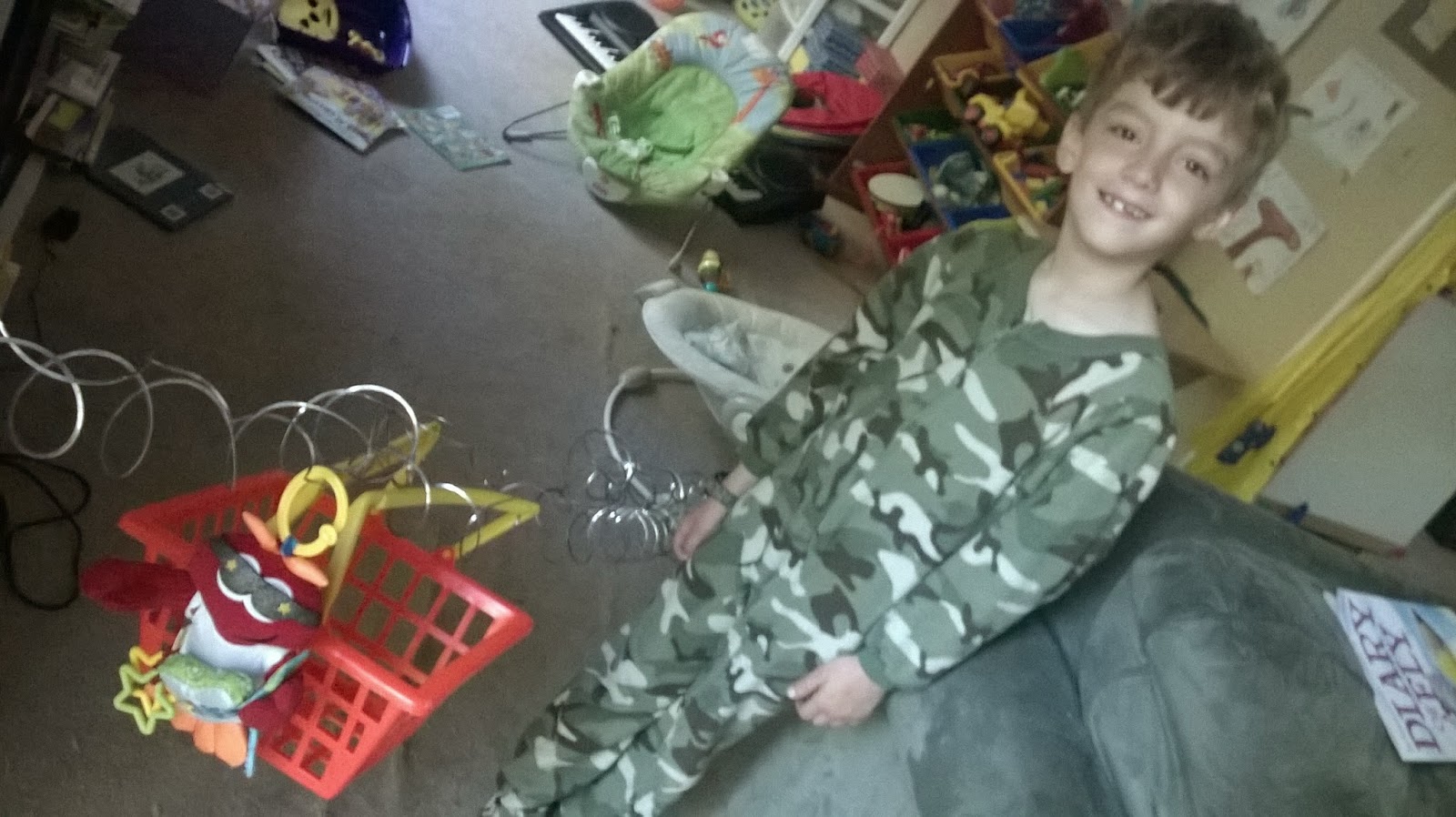 Look in any manual listing the diagnostic criteria for autism and you'll see mentioned as a hallmark: Exhibits restrictive and repetitive behaviors.

The picture above is of Ethan's "gate." He got the idea for it after coming across a mangled Slinky about two months ago. Since then, he has rebuilt the gate about 300 times.

He always builds it in the same place (stretching across the playroom and over to the back door). He always uses the same unconventional collection of materials: the Slinky, a toy shopping basket, a ribbon/mock "Olympic medal" we got at a Dollar Store, Dan's old iPhone, and a TV tray that's been sitting in the same spot since Chloe was born (yeah, I'm getting to that).

Asking Ethan why he likes to build this gate is pointless. I hear the same answer again and again ("because I like gates"..."I like to keep people out of things"). If you take down his gate because you have to do something silly like actually walk out the back door, he's not a happy camper. He won't tantrum, but you better believe he's going to put it right back as soon as possible.

He also can't explain why he uses the same few items for his gate again and again. These objects never grow old for him. I can't tell you how many times he's pointed out the shopping basket to me, and I try to act amaze that he's finagled the Slinky around the thing once again.

When Ethan's working on his gate, he's completely engrossed and completely happy. This is how it is with any of his obsessions (and really, I guess, how all kids are). Don't you love it, those of you with kids? Don't you love the absorbed silence of a child fully involved with a fun project? In the past for Ethan that's included puzzles...those Perplexus balls where you have to move a tiny ball through varying obstacles...constructing elaborate marble runs. 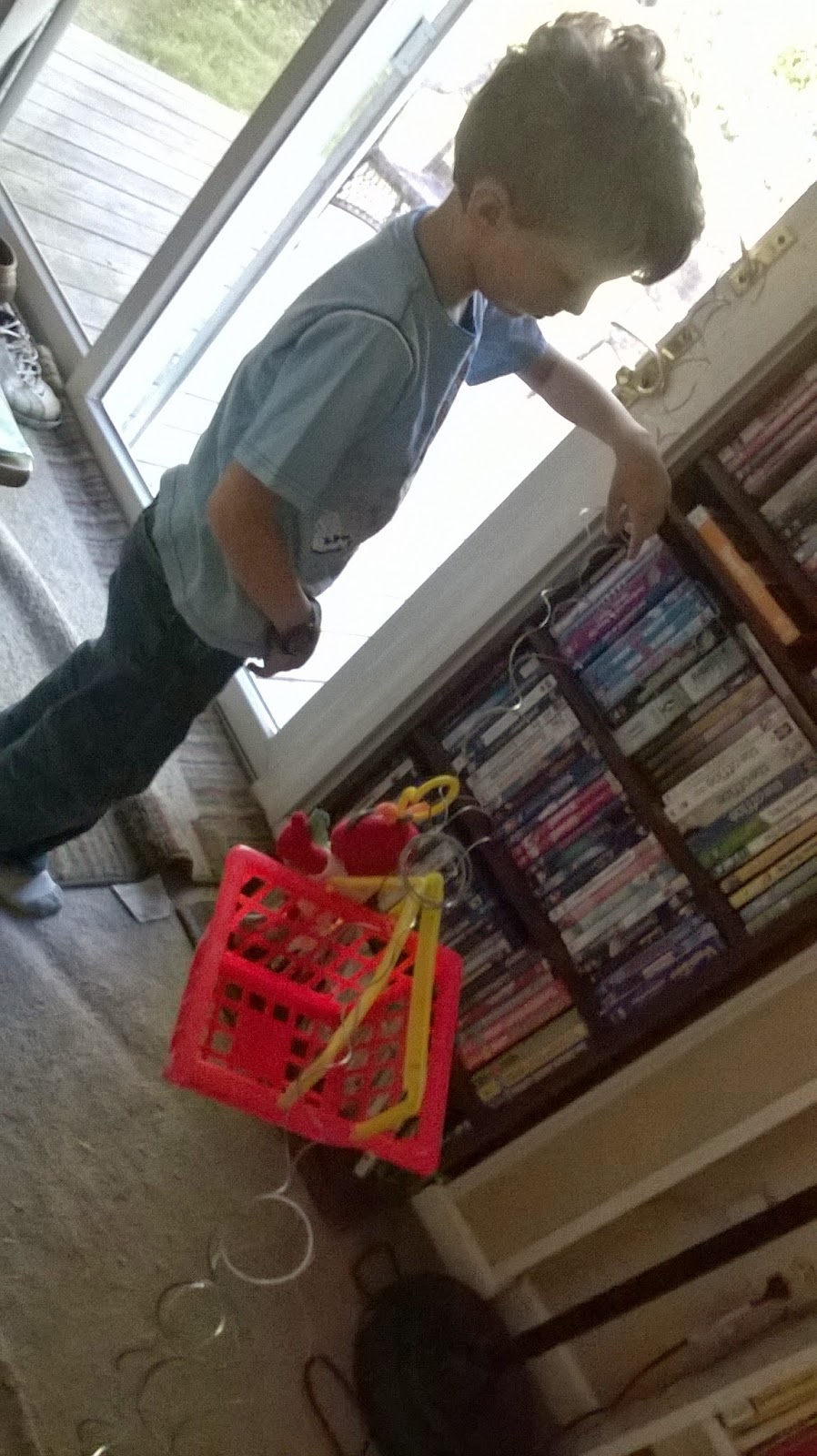 He notices the tiniest of details. I almost feel bad that we can't appreciate fully what he appreciates. The other day he spent the better part of a half-hour once he noticed the threads on the string of what used to be our toy Olympic medal had split into five parts -- he was trying to weave each microscopic-thin thread into a different spot. "Look how it goes here!" he then announced proudly, having me peer under the TV tray where the threads were wound around the iPhone cord.

No, he's not making Lego creations like most boys his age. The gate is his pride and joy. I stopped and watched him watch what he'd built yesterday. His eyes followed the path of the stretched Slinky. He traced his finger along the loops, searching to see where each one went, studying the complicated traffic jam where the Slinky was hopelessly tangled for a long, long time, trying not to lose sight of where his path went.

He is not typical. But in those moments when he is full of joy, how could I ask for anything more? 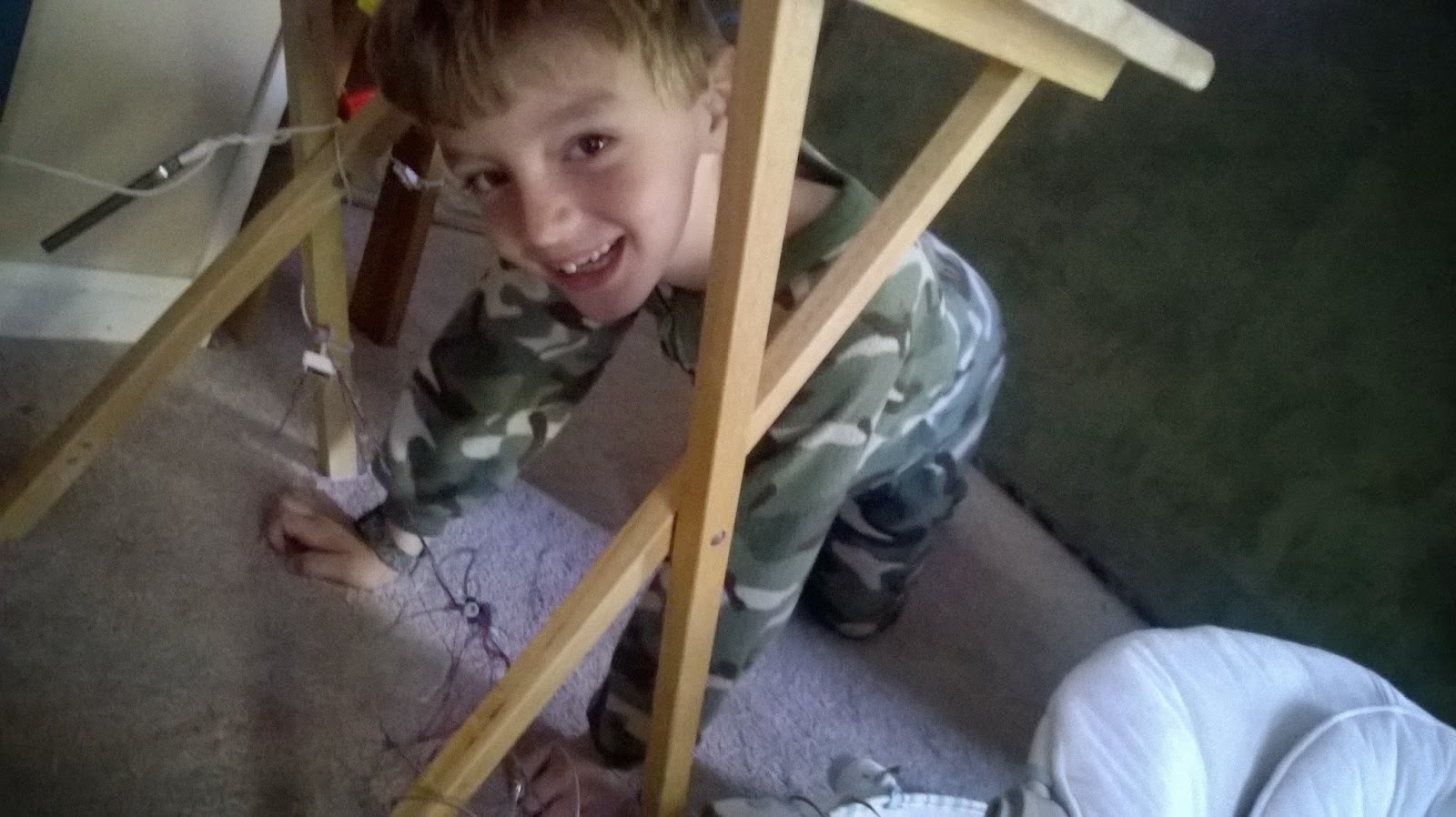