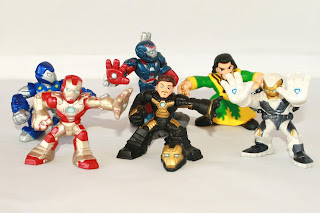 I know when it's about to begin because I hear the rummaging in one of our toy bins. Then, often, the cardboard block towers going up. There are grunts, groans, and various other guttural sounds. And the music, of course, that sounds a little bit like a movie sound track, during the fight scene.

Even Chloe knows. The other day as she came down the stairs and stopped to listen to what was happening in the playroom, she said matter-of-factly, "Ethan's doing a battle again."

Yes, Ethan and his battles, his epic fights between little superhero figurines or whatever he finds (this includes kitchen utensils like cheese graters or slotted spoons). They are the same almost every single time, and I absolutely love them.

When Ethan was little, he had an extremely difficult time with pretend play. This is no surprise, as it's often a challenge with people on the autism spectrum. But even compared to kids with autism, Ethan had very, very limited pretend play skills. We would try. I did, his therapists did, Anna did. We knew part of this was all about introducing ideas and possibilities. I've written about this before: the way we'd take out the farm and the animals, or build something very simple with Legos and put some people inside, or try to push around cars.

He just.didn't.like.to.play. Not in that way. Ethan loved to run and jump and climb through tunnels; he loved music; he enjoyed books and puzzles; he was of course especially fond of anything with buttons or a screen. And over time I realized that while in many ways Ethan showed quite mild symptoms of autism, in these two respects: lack of play skills and an absolute inability to become interested in something that did not interest him, he was very much autistic.

We made our peace with that. We had to, because there is nothing worse than trying to make a child play and making a child miserable. It's just wrong. So while other boys his age built up huge arsenals of those Matchbox cars or trains or superhero guys with the little sets, Ethan did other things. He became interested in sports. He spent a lot of time listening to CDs and memorizing every song he'd sing at VBS (or Transiberian Orchestra!). He learned to read -- well. And of course he became very, very interested in video games.

About a year or two ago I heard some commotion in the other room. Specifically, I heard Ethan talking in other voices. The voices seemed to be threatening each other. When I peeked in I saw him on the floor with two little guys (from our meager selection of superheroes) in each hand. Then, they started killing each other.

Ethan's "battles" had begun. He was actually pretend playing, and none of us had said a word or given him a single suggestion.

Yes, Ethan's battles. They are always set to dramatic music that he sings in the background. They usually are repeating something he's seen in a video game or on TV -- but not always. They used to always involve the cardboard blocks somehow knocking over and killing someone -- but not anymore. It's taken a long time, but the plots are getting a little more elaborate. The battles sometimes take place outside, sometimes in the shower, and yes, they sometimes involve "unconventional" items like potato mashers.

Ethan has mixed emotions about his battle play. On the one hand, when he sees me watching him, he tells me he "needs his privacy" and to stop looking. But then sometimes he'll ask me to take a video of him and put it on Facebook.

I do not have mixed emotions about his battle play. I think it's awesome. I wasn't sure if I'd ever see him play like this. And while it's not exactly the way a typical kid would play, that's okay. I use to build the same Lego house over and over and then have it destroyed by a tornado (don't ask; guess I'm on the quirky side, too).

Kids on the spectrum are always learning. And I believe autistic adults are, too, because we all are. I'm done believing all of that stuff about our brains being more pliable only up to a certain age. You just never know. I'm still going to take piano lessons and I'm yeah, I'll say it, middle-aged. We are all always learning, and have the capacity to start doing something we never thought we'd do.

So battle on, Ethan. We're all excited to see what you discover next.