Remembering in the Storms 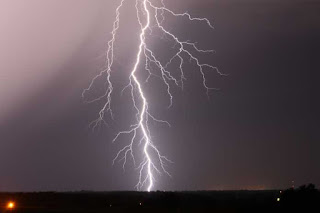 We've been plagued by a stretch of oppressively hot, humid weather that's been punctuated by thunderstorms. Last night we got the worst of them so far. At first Chloe and Ethan (who has a robust fear of lightning and particularly power outages that might affect his time on Wii) slept through it. But when a crash shook our house I heard both of them stirring and saw Ethan cowering in bed, shielding his eyes. We're not used to bad storms here. Dan and I have an ongoing joke that thunderstorms seem to purposely miss our part of town, so the kids haven't had much practice coping with them.

This storm was decidedly NOT passing us by. I can't remember the last time I saw so much lightning. For a little while I just sat in the dark and watched night momentarily become day, over and over and over. Then I tried to urge them to go back to sleep.

"Mommy, mommy, mommy!" I heard from the hallway, where Chloe was standing forlornly, clutching a book. Dan caved first.

"Would you like to come in our bed?" he asked. She haphazardly climbed up next to us and sprawled out.

A few minutes later Ethan was standing over us. He in particular had not liked the way thunder had crashed, then the power had gone out for a half-second before surging back on. For a while he just hung out at the foot of the bed, his head half-slumping. I could see how tired he was.

"Do you want to come up?" I asked. I knew he was especially enjoying the coolness of the room, as the kids only had a fan, not an air conditioner and most of the house felt like a sauna.

Chloe kept twisting and turning and performing near acrobatics. Was this what this girl always did in order to fall asleep? She kept mumbling about last week, and the thunder we'd encountered on top of a mountain in Maine. "The thunder is going to the mountain," she said, as it started to die down.

Somehow as time went by Dan and I were pushed to the far edges of the bed while Chloe took over a large section in the middle. Then the cat decided to hop on the bed and yowl in my ear, then look around for a spot.

My eyelids were drooping. I just wanted to sleep. With all of the feet and arms and elbows in my face an old song I remembered singing in grade school by John Denver started running through my head, over and over:

It'd hold eight kids, four hound dogs
And a piggy we stole from the shed
We didn't get much sleep but we had a lot of fun
On Grandma's feather bed

Yes, John Denver running through my head at midnight...that and I kept plunging in and out of a dream that involved, for some reason, moving to Seattle.

Jacob, my friend's son, has been fighting a very aggressive type of brain cancer. His parents have been so strong. His fight seems to be becoming more and more difficult.

His mom has been very diligent about providing many updates about what Jacob is going through on Facebook, these past four months. And I'll always remember -- I can't forget -- something she wrote early on, when all of this had just started.

She talked about how she remembered just a little while before Jacob was diagnosed, they were having a real issue with him climbing into his parents' bed at night. Maybe it was more than one kid; I'm not sure. She said they'd really been cracking down on that, that she had been concerned about it becoming a bad habit.

She was writing and looking back to the time when THAT had been her biggest concern. And she said how much she was longing to have that time back, how much she was looking forward to a time of just snuggling with her kids in bed. She reminded us to hold onto our kids, to enjoy them, to spend time with them, to remember those times that sometimes feel draining are also so precious.

I was thinking of Jacob.

And so I scrunched myself up to avoid falling off the bed and looked at their peaceful little selves as they slept, remembering they are fearfully and wonderfully made.

I remembered that a night of thunderstorms really would be over in just a blink.

And eventually, I fell asleep.

Please, friends...pray for Jacob and his family.