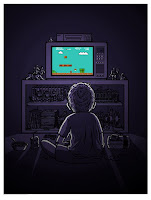 Summer is wrapping up, and while I've enjoyed swimming, roller coaster riding, vacationing, and reading mysteries from the library when I get a spare moment, I am looking forward to fall. Yes, fall in New England is beautiful, and I can't wait for pumpkins and leaves and getting lost in corn mazes, but what I mean is that fall equals school and for Ethan, soccer. And that means we will get the smallest of breaks in this summer's Epic Battle for Screens.

Ethan is a great kid. And there isn't a moment that I don't realize our challenges could be much, more worse. That being said, his thirst for all things electronic only seems to grow stronger -- and we seem to always be walking a fine line between understanding and not discouraging this "hobby" while also encouraging him to at times disengage from fantasy and interact with the real world. I know there are many kids, typical or not so much, who have these same issues. With Ethan they just seem a little....exaggerated.

If left to his own devices, Ethan would most likely play on his WiiU, Kindle, or Nintendo DS at least eight hours a day. His games of choice right now are Minecraft, Zelda, and Metroid. When he plays, he loses all sense of time and anything else going around him. He usually forgets about eating or drinking. Time stops and several hours can feel like minutes. We use a timer but that's not enough. I have to warn him continually before the timer goes off because only one warning is not enough. He's so lost in the world he needs time to ease his way out.

Almost everything in our house seems to be structured around screens. Bad behavior means screens are taken away. Chores are usually done with the knowledge that if they're not, screens won't turn on. Our daily summer routine is somewhat fashioned around screen time. At first we were trying to break it up into morning and afternoon, but I found that as soon as Ethan starts on screens, he has trouble stopping only to go back later. It ends up setting a bad tone for the day. So now most of it has been contained to the afternoon.

But what if plans change? What if it's the weekend or we actually have some sort of special plans in the afternoon? This becomes a bone of contention. And to my non-autistic mind, this is what's most frustrating. We have been on excursions this summer to the beach, an amusement park, and a fair, for example, and if too much of the day gets eaten up, no matter how much fun we're having (or money mom and dad are spending!), Ethan will start to get depressed and anxious because he's afraid of missing out on the day's screen time. Autistic people like routine, I try to remind myself over and over. It's not always easy, when you've shelled out 100-plus bucks at an amusement park, and your child is crying because they want to go home and play a game they've played 100 times.

Of course we have talks about being grateful when we do special family outings and about learning to enjoy other activities.

We caution about learning to do other things now, because as he gets older and becomes a grown up he can't play screens all day. He will have actual responsibilities, and it's better if he learns early how to tear himself away for a little while.

We have tried to harness this love for electronics into something that might really be useful for him in the future, like learning coding, with minimal success. He doesn't really like to code or to do something "practical." He wants to play his favorite Metroid game over and over.

The most difficult issue this summer has been Ethan's sneaking of screens. The boy is smart and he's getting smarter. And while he's not a great liar, he has sadly learned to lie or to try to cover his tracks. There have been many, many days this summer when I've rounded up the electronics in the house and hid them. Sometimes I think I'd love to purchase a big treasure chest, like the kind you'd see in a pirate movie. I'd throw everything in there and lock it up with a big golden key. Then it would at least make this process more interesting (and dramatic). Instead right now I'm hiding the Nintendo Switch in a filing cabinet and the WiiU game pad on top of the fridge and the Kindle and DS behind picture frames in our bedroom. It IS kind of like treasure hunting, when it's time to track this stuff down.

But we had to. We've found Ethan up in the night now several times, playing games (sometimes for hours). We've discovered him in the bathroom actually playing Mario Kart on the DS. We've caught him outside with his friend on the swing set watching videos on my phone.

The line between compassion and understanding and frustration is sometimes very thin. I KNOW his developmental pediatrician said he might need more screen time than the average person. I also know he HAS to have other interests and to learn how to at least sometimes stand up to perseverative thoughts that tell him he needs to play a game and he needs to play it now, and nothing else.

"I can't help it!" he often claims, and I don't want to just blow that off. Along with autism does often come some obsessive-compulsive tendencies. I don't think he's JUST being willful.

"It's just my autism!" he says, but we have to be mindful of letting him play that card all of the time.

"Ethan, we all have our struggles," I will tell him often. "It's not just you. And it's not impossible to overcome." Or at least improve. And it's so true. Maybe it's not screens. Maybe it's food. alcohol. Or shopping. Or worrying. I think most of us have that weak area that compels us; that's so hard to resist. I try to remember my failings, rather than just pounding my fist. These are real struggles, for all of us. Self-control. Self-discipline. Removing the thrill of instant gratification. This is the world we live in. But I know we don't have to let the wave completely sweep over us. We can take baby steps to stand against the tide.